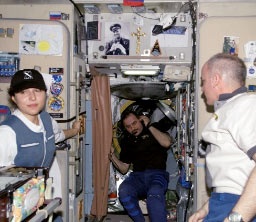 With them was Spaceflight Participant Anousheh Ansari, an American businesswoman who flew to the space station with the Expedition 14 crew and spent about eight days aboard. She was on the station under a contract with the Russian Federal Space Agency (Roscosmos).

Image at right: The departing members of Expedition 13 including Spaceflight Participant Anousheh Ansari are in the Zvezda service module. From left are, Ansari, Commander Pavel Vinogradov and Flight Engineer Jeff Williams. Credit: NASA

Vinogradov and Williams will spend several weeks in Star City, near Moscow, for debriefing and medical examinations. Vinogradov served aboard the Russian space station Mir for 198 days in late 1997 and early 1998. He did five spacewalks there, and another with Williams. Williams, an Army colonel, flew on STS-101 in May 2000. He did one spacewalk during that flight to the station and two on E13.

They launched from the Baikonur Cosmodrome in Kazakhstan last March 29 and docked with the station April 1. E13 participated in the return to assembly of the station. The Space Shuttle Atlantis brought the P3/P4 truss and its solar wings to the station during its STS-115 mission Sept. 9 to 21. They also continued station maintenance and did scientific experiments.

Before closing the Soyuz-station hatches about 2:45 p.m. Thursday, Vinogradov and Williams said farewell to the Expedition 14 crew, Commander Mike Lopez-Alegria and Flight Engineer Mikhail Tyurin. That crew launched with Ansari from Baikonur Sept. 18 at 12:09 a.m. 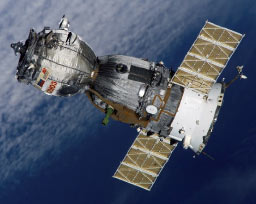 Back on the space station, the E14 crew began the solo portion of its six-month increment.

Image at left: A Soyuz spacecraft is photographed moments after undocking from the International Space Station on April 8, 2006. Inside were the Expedition 12 crew members and a Brazilian Space Agency astronaut. Credit: NASA

Lopez-Alegria is a veteran of three spaceflights on the space shuttle, including two missions to the station, where he did five spacewalks. Tyurin spent 125 days aboard the station as a member of the Expedition 3 crew between August and December 2001.

Joining them during their stay on the station is Thomas Reiter, a European Space Agency astronaut from Germany, also flying under a Roscosmos contract. He arrived at the station in July aboard Discovery on STS-121 and served with Expedition 13 during the last part of its increment. He participated in one of the two E13 spacewalks.

Reiter is the first non-Russian, non-U.S. long-duration crew member on station. He brought the station crew back to three members for the first time since May 2003, in the wake of the Columbia accident.
› Back To Top