Grow Text SizeShrink Text Size
May the Force Be With Them 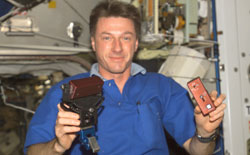 If there are bowling-ball size satellites flying in formation inside the International Space Station, where's Luke Skywalker?

What may sound like a scene straight from a "Star Wars" movie is actually an experiment that will test how well spacecraft can fly in formation and then rendezvous and dock without the aid of a human pilot.

Astronaut Jeff Williams won’t need the Force or a lightsaber May 18 when he unveils the first of three free-flying nano-satellites and releases it for a test flight inside the U.S. Destiny Lab.

Developing autonomous formation flying and docking control algorithms is an important step in making future space missions possible. Today, the ability to coordinate and synchronize multiple unmanned spacecraft in tightly controlled spaces can only be done through the magic of movies. But, SPHERES could someday make it a reality.

The first SPHERES satellite arrived aboard the 21 Progress vehicle on April 26.

Each satellite is about 8 inches in diameter, weighs about 7 pounds, and has its own internal avionics, software, and communications systems. They are powered by two AA batteries and will use carbon dioxide gas thrusters to maneuver through the Destiny Lab.

As the satellites fly through the station, they will communicate with each other and an ISS laptop through a wireless link. 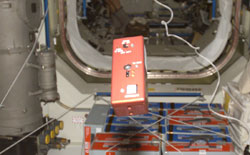 Image to right: The SPHERES Beacon / Beacon Tester floats in the Unity node of the space station. Credit: NASA

During Expedition 8 and 9, ISS crewmembers performed tests without the satellite to evaluate the ultra-sound and infrared beacons the satellites will use to determine their position.

During Expedition 13, Williams will initiate and monitor a series of test flights in which the satellite performs 10 to 15 pre-planned maneuvers, each lasting 5 to 10 minutes.

Between test flights, Mission Control and the MIT ground team will evaluate the satellite’s flying performance and make any needed software modifications. It will be tested for attitude control, station keeping, re-targeting, collision avoidance and fuel balancing algorithms. A simple Velcro docking system will be used to test its rendezvous and docking capability.

The lessons learned from this experiment could also be used to develop free-flying robotic assistants capable of helping astronauts on future spacewalks.

The second satellite is scheduled to launch to the station on STS-121 in July 2006. The third will be launched on STS-116. Three will also remain on the ground for testing.
› Back To Top