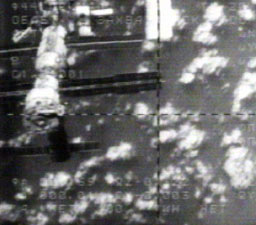 The 21st Progress to visit the station has just over 2½ tons of equipment and supplies on board. Included in its 5,040 pounds of cargo are more than 1,900 pounds of propellant, just over 100 pounds of air and oxygen, 661 pounds of water and almost 2,360 pounds of dry cargo.

Image to right: The International Space Station as seen from a video camera on the approaching Progress 21 spacecraft. Credit: NASA TV

The new Progress also has on board some small crustaceans for a Russian scientific experiment called Aquarium. That experiment looks at stability of closed ecological systems in microgravity. It could provide information useful for lengthy human spaceflights.

Progress 21 docked at the aft port of the Zvezda Service Module. Station crewmembers, Expedition 13 commander Pavel Vinogradov and NASA Science Officer Jeff Williams, will open the new arrival's hatch later today. While they might sample some of the fresh food aboard the Progress, they will begin unloading the Progress on Thursday.

Its sister cargo carrier and predecessor at the station, Progress 20, will remain at the Pirs Docking Compartment until mid-June. P20, with its load of trash and surplus equipment from the station, will be deorbited and burn after entry into the Earth's atmosphere. 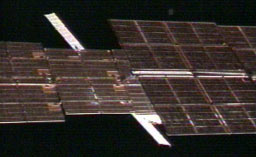 The Progress is similar in appearance and some design elements to the Soyuz spacecraft, which brings three crewmembers to the station, serves as a lifeboat while they are there and returns them to Earth. The aft module, the instrumentation and propulsion module, is nearly identical.