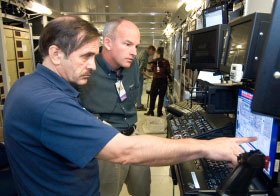 In addition to welcoming the resumption of space shuttle flights to their home in orbit, the crewmembers are scheduled to resume three-person crew operations and assembly of the station.

The six-month stay of Expedition 13 will focus on station assembly preparations, maintenance and science in microgravity. The commander is Pavel Vinogradov, 52, representing the Russian Federal Space Agency, who also serves as the Soyuz commander. Astronaut Jeffrey Williams, 47, a U.S. Army Colonel, serves as flight engineer and NASA science officer.

Launching with them was Brazilian Astronaut Marcos Pontes, 42, who spent eight days on the station under a contract with Roscosmos, the Russian Federal Space Agency. 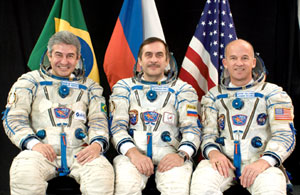 Pontes returned to Earth on Expedition 12's Soyuz with McArthur and Tokarev.

Vinogradov and Williams are scheduled to be joined during Expedition 13 by European Space Agency Astronaut Thomas Reiter of Germany, 47. He is to fly into space on the STS-121 mission targeted for launch no earlier than July 2006.

Reiter, who flew for six months on the Russian space station Mir, will be the first non-American or non-Russian long-duration crewmember on the Station. He will fly under a commercial agreement between ESA and Roscosmos.

Image to left: ESA Astronaut Thomas Reiter, attired in a training version of the shuttle launch and entry suit, awaits the start of a mission training session. Credit: NASA

When Reiter arrives at the station, the long-duration crew will have three people for the first time since May 2003.

Station operations and maintenance will take up a considerable share of Expedition 13's time. The crew also will work with experiments across a wide variety of fields including human life sciences, physical sciences and Earth observation as well as education and technology demonstrations.

Many experiments are designed to gather information about the effects of long-duration spaceflight on the human body to help with planning future exploration missions to the moon or Mars.

Station assembly work will include preparation for expansion of the ISS main truss and for installation of additional solar arrays. The STS-115 space shuttle mission is scheduled during Expedition 13 and will resume the major assembly of the station. The shuttle and station crews will work together to add to the port truss structure.

Two spacewalks are planned during Expedition 13. The one U.S. and one Russian spacewalk will focus on continued outfitting of the station to prepare external hardware for the addition of station elements and tending to external science experiments. Williams has one previous spacewalk, while Vinogradov conducted five spacewalks on his mission.

In addition to the two space shuttles, Expedition 13 will see the arrival of two unpiloted Russian Progress cargo vehicles.
› Back To Top