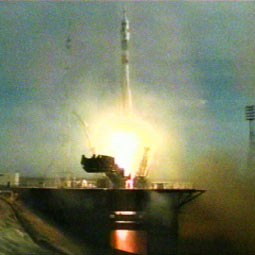 Image at right: Expedition 13 lifts off onboard a Soyuz rocket from Baikonur, Kazakhstan. Credit: NASA TV

Their Soyuz capsule reached orbit a little less than nine minutes after liftoff from the Baikonur Cosmodrome in Kazakhstan. Russian flight controllers reported the spacecraft’s solar arrays had deployed as scheduled, and that all appeared normal.

With the Expedition 13 crew is Marcos Pontes, the first Brazilian astronaut to go into space. He is flying under a contract with the Russian Federal Space Agency (Roscosmos). He will spend about eight days on the station.

Pontes will return to Earth with Expedition 12. That crew, Commander Bill McArthur and Flight Engineer Valery Tokarev, has been on the orbiting laboratory since October.

They are scheduled to undock at 4:28 p.m. EDT April 8 in the Soyuz that brought them to the station. Landing is scheduled for 7:46 p.m. in the steppes of Kazakhstan. 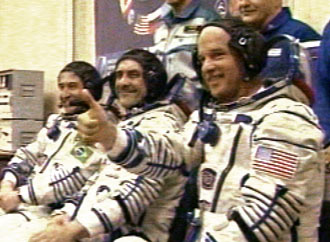 Joining them during their stay on the station will be Thomas Reiter, a European Space Agency astronaut from Germany, also flying under a Roscosmos contract. He is scheduled to come to the station on Discovery's STS-121 mission, set for no earlier than July. Reiter is to be the first non-Russian, non-U.S. long-duration crewmember on station. He will bring the station crew back to three for the first time since May 2003, in the wake of the Columbia accident.

Vinogradov and Williams get a safety briefing shortly after their arrival, and then begin extensive handover briefings from their Expedition 12 predecessors. They will get training on the station's Canadarm2 and on systems and experiments on the station.

Expedition 13 crewmembers are scheduled to do two spacewalks. One will be by Williams and Reiter in U.S. spacesuits and the other by Vinogradov and Williams in Russian spacesuits.
› Back To Top