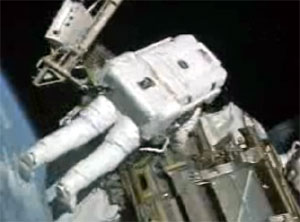 They had a third station crew member for the first time in more than three years. Expedition 13 Commander Pavel Vinogradov coached them through their prebreathe exercise program and helped them suit up for their outing.

The station crew was reduced to two members in May 2003 in the wake of the Columbia accident. Since then, spacewalkers have had to reconfigure station systems before donning their spacesuits without help.

Williams and Reiter were coached during their spacewalk tasks by Astronaut Steve Bowen. He will act as spacewalk intravehicular officer from the International Space Station Flight Control Room in Houston's Mission Control Center.

The first and longest major task of the spacewalk was installation of the Floating Potential Measurement Unit (FPMU). That device is designed to measure the electrical potential of the station so ways can be verified or devised to minimize arcing hazards as the ISS grows. 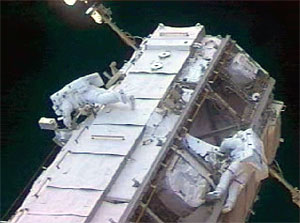 They spent about half an hour setting up equipment. They then moved with the FPMU to a camera mount near the upper outboard end of the S1 (starboard one) truss.

Next they moved back to the airlock. There they installed two Materials on International Space Station Experiment (MISSE) containers. MISSE 3 goes on one of the high-pressure tanks around the crew lock, while MISSE 4 is set up on Quest's outboard end.

The experiment, housed in suitcase-like containers left open, looks at the long-time effects of space on a variety of materials. The idea is to identify optimal materials for use in future spacecraft.

Williams installed a controller for a thermal radiator rotary joint on the S1 truss. Meanwhile, Reiter replaced a computer on S1. 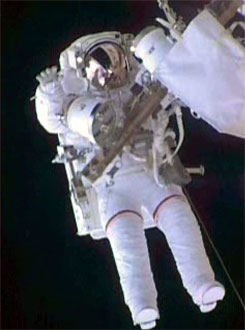 While Reiter finished that task, Williams began installation of a starboard jumper and spool positioning device (SPD) on S1. Reiter inspected a radiator beam valve module SPD site and installed one there, then moved on to install a port jumper and SPD.

The jumpers are designed to improve the flow of ammonia through the radiators once that coolant is installed.

Williams did two get-ahead tasks. The first was installation of a light on the truss railway handcart. He then replaced a malfunctioning GPS antenna. After Reiter finished the infrared camera experiment with the RCC, he installed a vacuum system valve on the U.S. laboratory Destiny for future scientific experiments.

The crew still had spacewalk time remaining, so Mission Control came up with more extra tasks. They included moving two articulating portable foot restraints to prepare for an STS-115 spacewalk, photographing a scratch on the airlock hatch and retrieving a ball stack, which connects hardware to the station, for inspection from PMA-1.

The spacewalk ended with cleanup and airlock entry.

It was the third spacewalk for both Williams and Reiter. It was the 69th spacewalk to support station assembly and maintenance and the 22nd from the Quest airlock.
› Back To Top