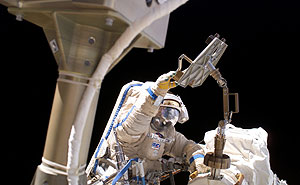 Repair of a vent for the station's oxygen-producing Elektron unit, retrieval of experiment results and replacement of a camera on the orbiting laboratory's rail car system were among tasks completed during their 6-hour, 31-minute spacewalk.

Wearing Russian Orlan spacesuits, they moved from Pirs to the Strela hand-operated crane, and used it to move about the station's Russian segment.

The Elektron vent repair was the first task. Because of a problem with that vent, Vinogradov had to reroute Elektron's hydrogen vent line to a vent also used by the Vozdukh carbon dioxide removal system. This repair will enable them to re-establish the vent line.

The Elektron breaks down water into its components, hydrogen and oxygen. The oxygen is used in the station and the hydrogen is vented overboard. The repair, involving installation of a nozzle on the neck of a valve, was followed by a few minutes to photograph the area. 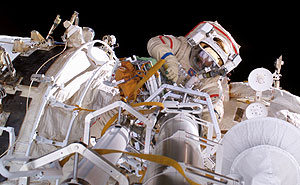 Next Vinogradov removed a plate from the Kromka experiment. Kromka looks at contamination from thruster jet firings and devices to protect the station's exterior from them. While he was doing that, Williams removed a Biorisk experiment container from Pirs for return to the inside of the station. Biorisk studies the effect of spaceflight on microorganisms.

Vinogradov then removed slack in a cable of an antenna on the Zvezda Service Module. The antenna is designed for docking of the unpiloted European Automated Transfer Vehicle, scheduled for its first launch next year. Meanwhile, Williams retrieved another contamination-monitoring device from Zvezda.

The spacewalk's final and longest major task was replacement of a malfunctioning camera on the Mobile Base System, which moves the Canadarm2 robotic arm along the rails on the station's main truss. Both spacewalkers worked on that job. With the crew a little behind its schedule, maximum time for the spacewalk was extended so the task could be completed.

Vinogradov and Williams secured the Strela before re-entering Pirs to conclude the spacewalk. It was the sixth spacewalk for Vinogradov and the second for Williams.
› Back To Top