Grow Text SizeShrink Text Size
Darkness of the Eclipse a Call for Enlightenment
A circle of darkness moving quickly across a lengthy swath of the Earth on Wednesday triggered fascination and reaction from people around the world. An astronaut about to embark on a six-month space mission said that fascination is a reason humans work hard to shed light on the unknown.

The shadow of the moon moved in a northeasterly direction, beginning in Brazil and across the Atlantic, northern Africa, western China and Mongolia. Its longest totality duration was just over four minutes in western Libya, about 1,250 miles south of Tripoli a little after 5 a.m. EST. 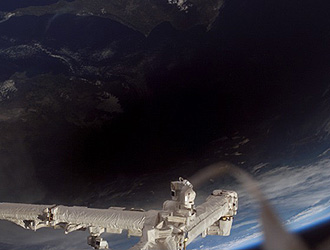 Image to right: The shadow of the moon falls on Earth as seen from the International Space Station, 230 miles above the planet, during a total solar eclipse on Wednesday, March 29. Image credit: NASA

Astronaut Jeffrey Williams said the reaction to the eclipse on the day of the launch of the 13th crew of the International Space Station reminds "all of us who work in the space exploration program just what our purpose is, for discovery and exploration, and understanding the unknown."

He said such phenomena have, throughout history, inspired people to explore and discover, "to understand why things like that happen."

Williams, the NASA science officer on the station's Expedition 13 crew, is to launch with E13 Commander Pavel Vinogradov to the station today at 9:30 p.m. EST from the Baikonur Cosmodrome in Kazakhstan, where they spoke to media this morning, to begin their stay in space.

With them will be Marcos Pontes, Brazil's first astronaut, who will spend about eight days on the station and return with the Expedition 12 crew, which is wrapping up its six-month stay in orbit. Pontes said he saw the eclipse as a good omen for the start of the mission.

Vinogradov said he found the event an interesting astronomical phenomenon. He said he had no opinion about whether it was good or bad.

Many people in the path of the eclipse were a good deal more excited about the event. Some likened it to the end of the world while others feared ill effects from the event. Some saw it as a religious experience.

Many, including some Americans who had traveled great distances to see the eclipse, said it was a fascinating and exciting natural phenomenon.

Vinogradov didn't share their excitement." We just know that the moon was between the Earth and the sun," he said.
› Back To Top