Grow Text SizeShrink Text Size
Station Crew Undocks, Heads Back to Earth
Commander Bill McArthur and Flight Engineer Valery Tokarev, the 12th crew of the International Space Station, undocked in their Soyuz spacecraft from the orbiting laboratory at 4:28 p.m. EDT Saturday and headed for a landing in the steppes of Kazakhstan at 7:48 p.m. 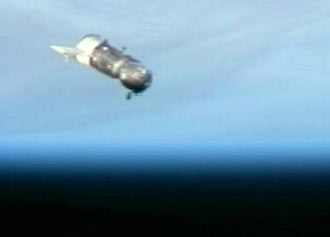 Image above: Expedition 12 is in the Soyuz spacecraft backdropped by the Earth moments after undocking for their return home. Photo Credit: NASA TV

With them was Marcos Pontes, the first Brazilian astronaut, who flew to the space station with the Expedition 13 crew and spent about eight days doing experiments. He was aboard under a contract with the Russian Federal Space Agency (Roscosmos).

McArthur and Tokarev will spend several weeks in Star City, near Moscow, for debriefing and medical examinations.

They launched from the Baikonur Cosmodrome in Kazakhstan last Sept. 30 and docked with the station Oct. 3. During their increment they performed two spacewalks, continued station maintenance and did scientific experiments.

Before closing the last of the Soyuz-station hatches at 1:23 p.m. Saturday, McArthur and Tokarev said farewell to the Expedition 13 crew, Commander Pavel Vinogradov and NASA Science Officer Jeffrey Williams. That crew launched with Pontes from Baikonur March 29 at 9:30 p.m. EST.

Back on the space station, the E13 crew began the solo portion of its six-month increment.

Joining them during their stay on the station will be Thomas Reiter, a European Space Agency astronaut from Germany, also flying under a Roscosmos contract. He is scheduled to come to the station on Discovery's STS-121 mission, set for no earlier than July.

Reiter is to be the first non-Russian, non-U.S. long-duration crewmember on station. He will bring the station crew back to three for the first time since May 2003, in the wake of the Columbia accident.
› Back To Top