Space station Commander Bill McArthur and Cosmonaut Valery Tokarev moved their Soyuz TMA spacecraft from the Earth-facing port of the Zarya module to the aft docking port of the Zvezda Service module. 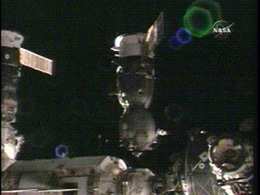 The move was made to clear the Zarya port for arrival of the Expedition 13 Soyuz TMA. Russian Commander Pavel Vinogradov and U.S. Flight Engineer Jeffrey Williams, will launch March 29 and dock at the station March 31. With them will be Marcos Pontes, a Brazilian astronaut who will return to Earth with McArthur and Tokarev on April 8.

Image to left: The Soyuz TMA spacecraft as it undocks from the Earth-facing port of the Zarya module. Image credit: NASA TV

The two docking ports are a little more than 80 feet apart in a straight line distance. Tokarev, the Soyuz commander, backed the capsule about 115 feet away from the station, then maneuvered to a point about 80 feet behind the Zvezda.

The Soyuz traveled a little over 200 feet relative to the station. But while it was undocked, the capsule and the station covered a distance of about 10,000 miles more than 200 miles above the Earth's surface.

Preparations for the move began Thursday with a test of the Soyuz thrusters and continued Sunday with McArthur and Tokarev putting station systems in unmanned configuration. That was done to prepare for the unlikely eventuality that the Soyuz could not redock at the station. If that had occurred, the crew would have had to return to Earth.
› Back To Top