Grow Text SizeShrink Text Size
Progress With Gifts, Equipment and Supplies Docks at Station
An unpiloted Progress cargo craft docked with the International Space Station Friday at 2:46 p.m. EST with a cargo of supplies, equipment and fuel for the orbiting laboratory.

The new cargo carrier is the 20th Progress to dock at the station. Among its more than 2.8 tons of cargo are Christmas presents for station Commander Bill McArthur and Flight Engineer Valery Tokarev.

The presents won't come down the chimney. They'll come up through the Pirs Docking Compartment, where Progress 20 docked. Pirs is attached to an Earth-facing port of the Zvezda Service Module. 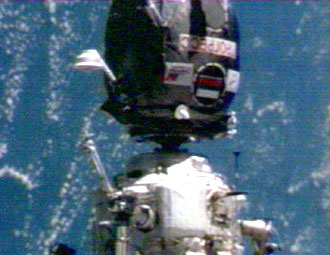 Tokarev was ready to take over control of the Progress using a manual docking system, but his intervention was not needed. The automated docking system brought the cargo carrier to Pirs smoothly and accurately.

The Progress launched toward the International Space Station Wednesday at 1:38 p.m. EST. It reached orbit about 10 minutes after launch, and its solar arrays and antennas were deployed as planned.

With the Soyuz that brought the Expedition 12 crew to the station and will take them home, Progress 20 brings to three the number of Russian vehicles at the station.

Its sister and predecessor at the station, Progress 19, will remain docked to the aft port of the Zvezda Service Module. Generally a Progress is undocked and deorbited shortly before the launch of the next Progress, to clear that docking port for the new arrival.

In this case, mission managers have decided that Progress 19 will stay at the station so its remaining oxygen can be transferred. That also will give station crewmembers a chance to fill it completely with garbage and unneeded equipment. It will re-enter and burn in the Earth's atmosphere shortly after its undocking, scheduled for early March.

In addition to Christmas presents, the dry cargo consists of equipment and supplies, experiment hardware, spare parts for the station, repair gear and life support system hardware.
› Back To Top