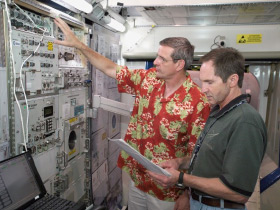 Image to left: From left are, Expedition 12 crewmembers Commander William McArthur and Flight Engineer Valery Tokarev, as they train inside a mockup of the Station's Destiny laboratory at Johnson Space Center, Houston, TX. Credit: NASA

In addition to marking the fifth anniversary of this uninterrupted presence of men and women in space, the crewmembers also will bring the Station into the new year and welcome the resumption of Space Shuttle flights to their home in orbit.

The six-month-plus stay of Expedition 12 will focus on Station assembly preparations, maintenance and science in microgravity. The commander is William McArthur, 54, a retired Army colonel. Cosmonaut Valery Tokarev, 52, a Russian Air Force colonel, will serve as flight engineer and Soyuz commander.

McArthur is making his fourth flight into space. Tokarev visited the Station in his previous spaceflight, on a Shuttle mission in 1999. McArthur and Tokarev will launch on a Soyuz spacecraft in early October from the Baikonur Cosmodrome in Kazakhstan.

With them will be Gregory Olsen, 60, who will spend eight days on the Station under a contract with Roscosmos, the Russian Federal Space Agency. He will be the third private citizen to reach the Station. 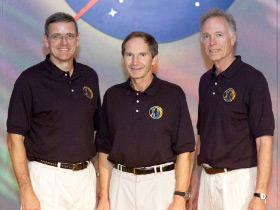 Olsen will return to Earth on Expedition 11's Soyuz with Krikalev and Phillips.

McArthur and Tokarev were to have been joined during Expedition 12 by European Space Agency Astronaut Thomas Reiter of Germany, 47. He was to fly into space on the STS-121 mission.

With that Shuttle mission delayed until no earlier than March 2006, Reiter would arrive at the ISS in the final days of the Expedition 12 increment. Reiter, who flew for six months on the Russian space station Mir, would be the first non-American or non-Russian long-duration crewmember on the Station. He will fly under a commercial agreement between ESA and Roscosmos.

When Reiter arrives at the Station, the long-duration crew will have three people for the first time since May 2003.

Station operations and maintenance will take up a considerable share of Expedition 12's time. But science-oriented education activities, Earth observation and scientific experiments, both with and without crew involvement, will continue.

The crew will work on a number of scientific experiments. The Payload Operations Center at the Marshall Space Flight Center in Huntsville, Ala., will operate some experiments without crew input and others work autonomously.

Station assembly work could include preparation for expansion of the ISS main truss and for installation of additional solar arrays.

Plans are taking shape for spacewalks by McArthur and Tokarev. They focus on continued outfitting of Station hardware and electrical systems and preparing external hardware for the addition of station elements. McArthur has two previous spacewalks, while Tokarev will be making his first.

Expedition 12 will see the arrival of an unpiloted Russian Progress cargo vehicle. The crewmembers also will relocate their Soyuz spacecraft from the Pirs docking port to the Zarya docking port to free the Pirs airlock for spacewalks.
› Back To Top