With them was American Greg Olsen, the third private citizen in space, flying under a contract with the Russian Federal Space Agency. He will spend about eight days on the station. 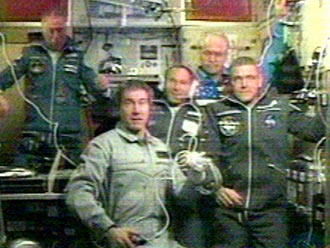 They launched from the Baikonur Cosmodrome in Kazakhstan just before midnight on Friday.

Olsen will conduct scientific experiments on the station, and then return to Earth with Expedition 11. That crew, Commander Sergei Krikalev and NASA Science Officer John Phillips, has been on the orbiting laboratory since April.

They will undock Oct. 10 in the Soyuz TMA that brought them to the station April 16. Landing is scheduled for 9:08 p.m. EDT that day in the steppes of Kazakhstan, winding up their 180-day increment.

Hatches were opened at 4:36 a.m. EDT. After hugs and greetings with the traditional bread and salt, they got a safety briefing from the Expedition 11 crew. In extensive handover briefings during their eight days together, they will get training on systems and experiments on the station and on the Canadarm2 robotic arm. 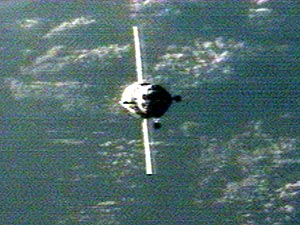 During their six months on the station McArthur and Tokarev will do two or three spacewalks. The first, from the Quest airlock in U.S. spacesuits, is planned for early November. Tasks include installation of a camera group and retrieval of the station's floating potential probe.

That will be McArthur's third spacewalk and the first for Tokarev.

About two weeks later the crewmembers will board their Soyuz spacecraft and move it from the Pirs docking compartment to a docking port on the Zarya module. That will clear the Pirs for use of its airlock in a spacewalk using Russian Orlan suits in December.

That spacewalk will focus on retrieving scientific experiments and photography of a micrometeoroid monitoring system and the Soyuz descent module's multilayer insulation. 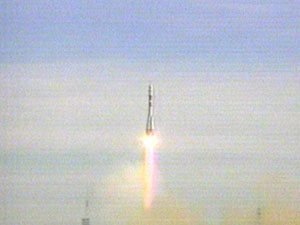 A third spacewalk early next year in U.S. spacesuits is under consideration.

McArthur and Tokarev also are scheduled to welcome an unpiloted Progress cargo craft to the station, just in time for Christmas. That Progress will bring fuel, equipment, supplies, water, oxygen and air to the station. Docking is planned for Dec. 23.

Station maintenance will occupy considerable time. They will continue scientific investigations aboard the orbiting laboratory, as well as a program of scientific education activities and Earth observations.

Their replacements, the 13th crew of the station, are scheduled to arrive in March.
› Back To Top