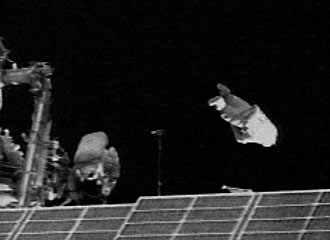 The spacewalkers, both in red-striped Orlan suits, re-entered the airlock of the Pirs docking compartment and closed its hatch at 11:27 p.m. EST Friday. During the spacewalk, Tokarev, Expedition 12 flight engineer, and McArthur, E12 commander, relocated an adaptor for a small crane, retrieved experiments and inspected and photographed parts of the station's exterior.

The spacewalkers ventured outside at 5:44 p.m. EST. After setting up tools and equipment, they positioned the unneeded Orlan spacesuit -- dubbed SuitSat-1 -- on a ladder by the station's Pirs airlock hatch. The suit reached the end of its operational life for spacewalks in August 2004. It was outfitted by the crew with three batteries, internal sensors and a radio transmitter for this experiment.

The SuitSat provided recorded greetings in six languages to ham radio operators for about two orbits of the Earth before it stopped transmitting, perhaps due to its batteries failing in the cold environment of space, according to amateur radio coordinators affiliated with the station program. The suit will enter the atmosphere and burn up in a few weeks.

Tokarev carefully jettisoned SuitSat-1 in much the same way McArthur jettisoned the Floating Potential Probe experiment during their November spacewalk. He pushed it away at about a 30-degree angle upward and about 10 degrees to the left of the back of the station.

After the spacesuit jettison, the crew relocated a boom adapter for the Strela, a Russian hand-operated crane, from the Zarya module to Pressurized Mating Adapter 3. That was done to clear the Zarya area for temporary stowage of protective debris panels for the Zvezda Service Module, to be delivered on STS-116.

Next the spacewalkers spent over an hour on a safing task at the mobile transporter, which can provide a base for the station's robotic arm for movement along the rails on the orbiting laboratory's main truss.

On Dec. 16 one of two trailing umbilical system cables providing power, data and video was severed by a device designed to cut the umbilical should it become jammed. A second cable provides the same links to the mobile transporter. After several attempts to drive a "safing" bolt with a high-tech screwdriver, McArthur wire-tied the cable to a handrail instead, eliminating the risk of uncommanded cutting. This disabled the transporter from further movement on the station’s rail system for the time being, but it isn't needed for assembly work until the STS-115 mission to install additional truss segments.

To replace the severed cable, a new umbilical assembly is scheduled to be installed during Discovery's STS-121 mission to the station.

Back on the hull of the Zvezda service module, spacewalkers retrieved the Biorisk experiment, which looks at microorganisms in space. Subsequently they photographed a sensor for a Russian Micrometeoroid Measuring System.

Tokarev and McArthur inspected and/or photographed several areas on Zvezda's exterior, including thrusters and nearby areas. They photographed a ham radio antenna and a fuel drain outlet pipe.

The spacewalkers inspected their suits, wiped off suit gloves and then jettisoned the towels before re-entering Pirs and closing its hatch.

This was the second spacewalk for Tokarev and the fourth for McArthur.
› Back To Top