The camera assembly installation on the Port 1 Truss was the first of the two primary tasks. The new device is similar to the camera assembly on the Starboard 1 Truss, and was installed on a P1 lower outboard stanchion. It will have a big role in future station assembly.

The camera assembly will be used after arrival of the P3 and P4 truss segment during STS-115, station assembly flight 12A, next year. It will offer visual perspective to arm operator Steve MacLean, a Canadian astronaut, as he maneuvers the truss segment for installation.

The truss segment brings with it another radiator and another set of solar wings. Stretching 240 feet from tip to tip, the solar assembly will almost double the total electricity generating capacity of the station.

McArthur and Tokarev spent about 2 hours, 10 minutes on the camera assembly installation. In order to have daylight for the Floating Potential Probe jettison, they moved on to one of the get-ahead tasks, the retrieval of a failed remote joint motor controller. Engineers are anxious to get this one back to see what went wrong before others are sent to the space station. 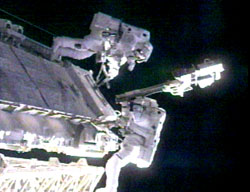 After taking the RJMC and tools from the first task back to the airlock, they then moved, with McArthur in the lead, up the P6 truss to the Floating Potential Probe.

The FPP was situated atop the P6 Truss between the station's solar wings. It was designed to measure the station's electrical potential and compare it to the surrounding plasma. It wasn't working.

Photos showed FPP fasteners had backed out. That raised concerns that the fasteners could become detached and perhaps cause damage.

McArthur and Tokarev released and stowed a grounding wire, then released the FPP housing from its stanchion. They checked its condition and then report lighting conditions to Houston with an eye to jettisoning the FPP. 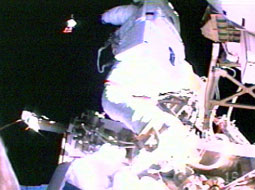 Image to left: The FPP moves away from the station moments after being jettisoned by Commander Bill McArthur. This view is from the camera mounted on Flight Engineer Valery Tokarev's helmet. Credit: NASA TV

Getting rid of the FPP was a little more complicated than just tossing it away. To ensure its safe departure, McArthur jettisoned the device backwards in relation to the direction the station is moving with a smooth motion. He aimed for a velocity of at least half a foot per second. He tried to throw the FPP 30 degrees upward and 10 degrees to the left of the back of the station, a target he apparently came close to hitting.

The spacewalkers spent about an hour on the FPP, wrapping up the second major task of the spacewalk.

That done, crewmembers completed a second get-ahead task: removal and replacement of a remote power controller module, a kind of circuit breaker. This one is on the mobile transporter, which moves along railroad-like tracks on the station's main truss.

It was the first U.S. Quest airlock-based spacewalk since an Expedition 6 spacewalk by Commander Ken Bowersox and NASA Science Officer Don Pettit on April 8, 2003.

The beginning of the spacewalk was delayed about an hour to repressurize the Quest airlock's crew compartment so the crew could check the position of a pressurization valve in Quest's equipment lock.