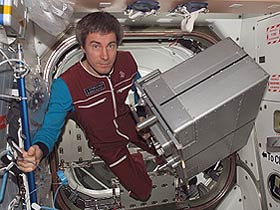 Mission Control Moscow also saluted Krikalev's achievement, and Krikalev joked in Russian, "You'll have to congratulate me every day from now on."

Krikalev spent his more than two years in space beginning in November 1988 with the start of his first long-duration flight to the Soviet space station Mir. Krikalev did back-to-back increments on his next Mir flight starting in May 1991 and returning to Earth in March 1992. While he was in orbit, the Soviet Union disintegrated and Mir became a Russian space station.

He became the first Russian to fly a Shuttle mission on STS-60 in February 1994. His second Shuttle flight took the Unity node to the International Space Station on STS-88 in December 1998. He was a member of the Station's Expedition 1 crew, launching in October 2000 and returning to Earth in March 2001. He launched as commander of Expedition 11 last April 14.
› Back To Top