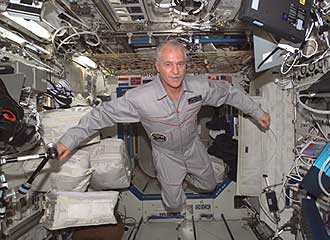 So who is this guy LEO, anyway? LEO stands for "low Earth orbit," which is where we have been since arrival at the International Space Station on April 17th. Specifically, we are in a nearly circular orbit at an altitude of about 355 kilometers above Earth's surface (compare that to the Earth's radius of 6378 kilometers and you'll understand why it's called "low" Earth orbit). We are moving generally eastbound, with a trajectory inclined from Earth's equator by 51.6 degrees. That means that we eventually fly over all parts of Earth equatorward of 51.6 degrees. We are traveling with the U.S. "Destiny" or Laboratory Module forward, and the Russian "Zvezda" or Service Module aft. I'll talk more about orbits, gravity, and other pet subjects in subsequent letters.

This week has been dominated by preparations for the arrival of the Space Shuttle Discovery and her seven-person crew, then disappointment at the postponement of the launch, and now a reshuffling of our schedule. We expected Discovery to launch on Wednesday, July 13th, and to arrive at the station on Friday, July 15th. As of this writing, troubleshooting of the space shuttle's fuel level sensor system is ongoing, and we may see Discovery next week. In the meantime, the delay has afforded us the opportunity to move our Soyuz vehicle from one docking location to another. This vehicle, often termed the "lifeboat" of the station, is in fact much more – it is what got us up here, and what will bring us home in October. The move of the Soyuz will put us in a better configuration for a future spacewalk. Today we started training for the relocation, which involves powering up the Soyuz, undocking, flying to the other port, and redocking. 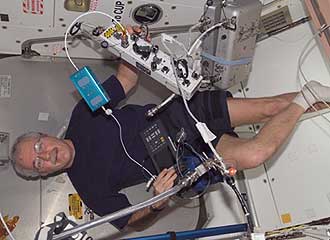 People often ask me about our workday up here. Typically I wake up at about 6:30 a.m., and then do some preparation for the day's work until about 7:15. Sergei and I have breakfast together, followed by a "Daily Planning Conference" at around 7:45 a.m., during which we speak with the Mission Control Centers in Houston, Moscow, and Huntsville. Then we go to work on a variety of tasks. We take a lunch break around 1 p.m. or sometimes a bit later, and go back to work after lunch. We continue until around 7 p.m., at which time we have a second Daily Planning Conference. Sergei and I have dinner at about 7:15 p.m., after which we sometimes watch part of a movie on a laptop in the kitchen. Starting at around 8:30 p.m., I do some preparation for tomorrow's activities, call home, answer e-mail, and usually find time to read for 30 minutes or so prior to going to bed around 11:30. The workday includes time for exercise, which I'll describe in a subsequent letter.

Saturday's schedule is usually lighter, with some routine cleanup activities and several conferences with folks on the ground, and Sunday is a free day. Certain special events, however, can upset this schedule. For example, due to the planned Soyuz relocation on Tuesday, we had a light day on Friday, a free day on Saturday, and a regular workday today (Sunday). Then tomorrow, after a short workday, we'll go to bed early and wake up in the middle of the night to start a very long workday.

That's about all for now. In future letters I'll talk about food and living conditions, science work, maintenance work, and physical exercise. In the meantime, we're both looking forward to hopping in the Soyuz and going for a short flight on Tuesday. And we're hoping to see the crew of Discovery a bit later this month!

Best regards from the International Space Station,
John Phillips
› Back To Top