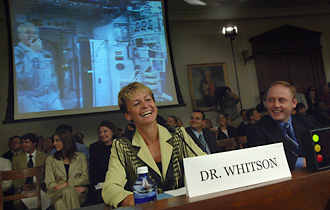 The House Subcommittee on Space and Aeronautics chaired by Rep. Ken Calvert (R-Calif.) heard testimony today from Astronaut John Phillips, as he orbited the Earth at a speed of five miles a second. It was a first for the Congressional representatives, and for Phillips.

After ringing the Station's bell to welcome the representatives, Phillips took questions for about 15 minutes on a wide range of topics, from safety on board to the view from orbit. "We are the experiment," Phillips told the committee, noting that "we certainly learn new lessons up here."

Phillips also talked with the committee about day-to-day operations on board, including a medical ultrasound experiment and preparations for the Progress resupply mission arriving later this week.

He praised the international cooperation on board as "wonderful" and explained how the ISS is paving the way for the Vision for Space Exploration. Experiences on the Station, Phillips said, "will allow us to establish a long-term station on the Moon and go on to Mars."

Phillips and Commander Sergei Krikalev, a cosmonaut, are the 11th crew of the International Space Station (ISS). They are about a third of the way through their six-month mission aboard the orbiting laboratory, which has had crewmembers aboard continuously for almost five years, since Nov. 2, 2000.

Phillips' testimony took a while to reach the lawmakers. He was 220 statute miles above the Earth, but his radio transmissions were routed to a Tracking and Data Relay Satellite (TDRS) in geostationary orbit at an altitude of about 22,300 miles.

From that TDRS, one of five NASA uses routinely which are in orbits that keep them above the same spot on the Earth's surface, Phillips' testimony was sent to a ground station in New Mexico and then, by more conventional means, to the hearing room in Washington. The process results in a delay of a few seconds in transmissions to and from the Station.

Two other astronauts, Peggy Whitson, who served on the Station from June 7 to Nov. 25, 2002, as a member of its fifth crew, and Mike Fincke, a member of the ninth Station crew from April 21 to Oct. 23, 2004, testified in person before the subcommittee.

A total of 108 individuals have visited the Station since December 1998. The ISS is a unique test bed for research and technology that will enable human exploration and benefit us on Earth.
› Back To Top