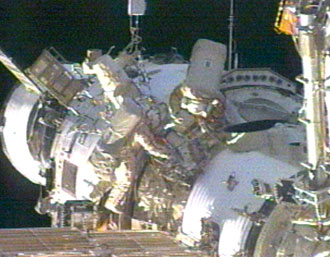 Wearing Russian Orlan spacesuits, both with red stripes, the two had opened the Pirs hatch at 3:02 p.m. EDT. Total time for the spacewalk was 4 hours and 58 minutes. It was the eighth spacewalk for Krikalev, designated EV1, and the first for Phillips, EV2.

The first task was to remove a Russian Biorisk experiment container housing bacteria from the outside of Pirs.

Next they removed an MPAC and SEED panel from the large-diameter aft section of the Zvezda Service Module. MPAC is a micrometeoroid and orbital debris collector. SEED is a materials exposure array. 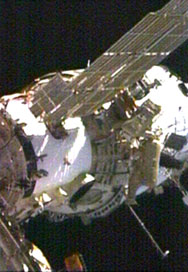 Crewmembers then moved to the Matroska experiment, a torso-like container with radiation dosimeters in human-tissue-equivalent material. They removed it and later, with the MPAC and SEED panel, brought it back inside the Station.

Krikalev and Phillips installed a spare television camera on Zvezda, then photographed and checked a Korma contamination-exposure experiment tablet on a handrail. That done, they removed a materials exposure experiment container and replaced it with a similar unit.

One task was deferred because of the length of the spacewalk. That was to remove a grapple fixture for a Strela crane from the Zarya module and relocate it on Pressurized Mating Adapter No. 3, attached to the Station's Unity node. That job will be done on a future spacewalk.