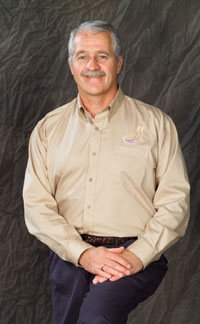 "It was a wonderful place to be," he said. "The crew was doing a great job; they were having a good time." His Shuttle crew spent only about eight days on the Station, and he wanted more. Now, after serving as a backup to the Expedition 7 crew, he will be spending six months in orbit.

Phillips knows what it's like to wait. It took him a while to become an astronaut in the first place. "I applied for 20 years before I was selected," he said.

Those 20 years were filled with success and accomplishment. Phillips was doing things he wanted to do even as he continued to apply to the Astronaut Corps.

After graduating second in his class of 906 at the Naval Academy he became an aviator. He flew A-7 Corsairs and had a variety of other Navy assignments. He left active duty after 10 years and enrolled at the University of California at Los Angeles, where he earned a master's and a doctorate in geophysics.

While at UCLA he did research on NASA's Pioneer Venus Spacecraft observations. He went to Los Alamos National Laboratory on a post-doctoral fellowship and subsequently accepted a career position there.

He was principal investigator on the Solar Wind Plasma Experiment aboard the Ulysses Spacecraft from 1993 to 1996. He has written more than 150 scientific papers. All the while he kept applying to be an astronaut.

"My goals kind of matched my career progression toward becoming an astronaut," he said. He had wanted to be a Navy pilot. "I went to grad school to become a physicist ... because at that point in my life, I wanted to be a scientist," something he did for nine years.

"All that time I was continuing to apply to be an astronaut, and after many, many years I finally got their attention." In April 1996, he achieved that long-sought selection. 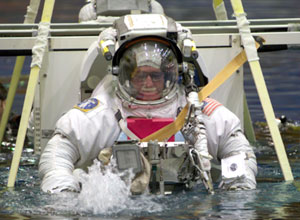 Phillips has two goals for Expedition 11 -- to keep the Station in good condition and to carry out a program of scientific research. An added plus for the increment is the scheduled arrival of the Shuttle Discovery on the STS-114 return-to-flight mission. "This is going to be a pivotal moment, not only for NASA but for the whole ISS partnership."

He looks forward to the mission with great anticipation, starting with the flight to the Station on a Soyuz TMA spacecraft, with its complexities and demands for crew interaction. "It's small, but it's fun." ... It will be a "great adventure of going halfway around the world and launching on a Russian rocket."

Phillips, 54 on April 15, is married and the father of two children. He believes deeply in what NASA is doing. There are risks, and he wonders if it sometimes looks too easy.

"I liken it to polar exploration in the 19th Century ... looking for the Northwest Passage. Ships were lost and brave people were killed, but that doesn't mean we never went back to that part of the world again. I consider it the same in space exploration.

"A civilization that only looks inward will stagnate," he said. "We have to keep looking outward; we have to keep finding new avenues for human endeavor and human expression. ... Risk is part of the territory."