Grow Text SizeShrink Text Size
Sergei Krikalev: From Engineering and Aerobatics to Cosmonautics
Sergei Krikalev is no stranger to the International Space Station. He flew on the first Station assembly mission on Space Shuttle Discovery. That flight, STS-88 in December 1998, brought the Unity Node to be linked to the Zarya module, launched the month before. 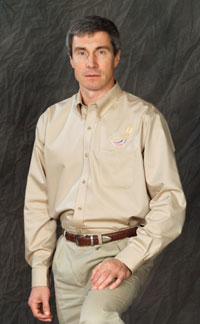 He also spent more than 4 1/2 months in orbit as a member of Expedition 1, the first Station crew that established what has become a continuous human presence in space.

That mission brought his total time in space to a year, five months and 10 days, including two long-duration flights to the Mir space station, one of them a double increment of more than 10 months. He already has done seven spacewalks.

Now he will add to those totals with about six months as commander of the Expedition 11 crew and two more spacewalks. On the 124th day of this mission Krikalev will break the record for total time in orbit now held by Cosmonaut Sergei Avdeyev -- 747 days in space.

"The job itself is very interesting for me, being there and being able to look back on Earth, to do something challenging." That, he said, is what's important. As for the record, "I probably never paid enough attention to it."

Sergei Konstantinovich Krikalev was born Aug. 27, 1958, in St. Petersburg (then Leningrad), Russia. He's come a long way since then, literally and figuratively. He has traveled farther than almost any other human in the course of his five previous spaceflights. He also grew from one of many young Russians who wanted to become cosmonauts into eminence among that very select group of Russian spacefarers.

He became a good enough pilot to fly aerobatics competitively, winning a national championship and a place on the Soviet national team. His engineering skills won him a job at RSC Energia, the Russian maker of space equipment, after graduation.

After four years of testing spaceflight equipment, developing spaceflight procedures and working in flight control positions, he was selected as a cosmonaut in 1985. 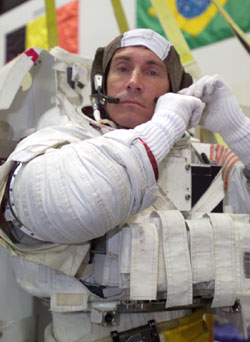 Kirkalev's sixth spaceflight will be his third visit to the Station. He looks forward to seeing a much larger and much more capable Space Station than the one he left in 2001. He also is interested in learning how the orbiting laboratory has withstood the test of time in the harsh conditions of low-Earth orbit.

Krikalev is married and the father of a daughter. Like everyone else who goes into space, he is asked about the risk spaceflight entails (and his family's reaction to it) and its prospective rewards. Krikalev answers both with matter-of-fact confidence.

The rewards are easy. Unless we gain experience in long-duration spaceflight that the station offers, he says, we will never move farther from the Earth.

He answers the risk questions seriously but without fear. His family, he says, worries about him but at the same time has confidence in his abilities. As commander, his primary responsibilities are mission safety and mission success, just as they were for his 10 predecessors.