Grow Text SizeShrink Text Size
Pass the S'mores Please!
Station Crew 'Camps Out'
There won’t be a tent and there won’t be mosquitoes. But there will be s’mores, sleeping bags and some roughin’ it -- among the stars, not under them. The space station crew is planning a camp out.

Expedition 12 Commander Bill McArthur and Expedition 13 Flight Engineer Jeff Williams will pack their sleeping bags April 3 and spend the night in the closet-size Quest Airlock. The “camp out,” as the crew and Mission Control call the plan, will test procedures that could shorten preparation time on future spacewalks. Those saved minutes will help future crews as they continue building the space station.

Camping out the night before a spacewalk reduces the time the crew must breathe pure oxygen to avoid decompression sickness -- commonly called "the bends" -- from hours to minutes. 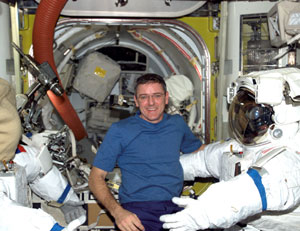 The plan calls for the crewmembers to shut themselves in the airlock and lower the air pressure to 10.2 pounds per square inch, or psi -- the station is kept at 14.7 psi, or near sea-level pressure -- and then camp out for the night.

The marshmallows won’t be toasty and the sleeping bags won’t be cushioned by a grassy meadow, but McArthur and Williams will be “outside” the station’s living quarters.

Spending the night at a lower air pressure helps flush nitrogen from the body faster, preventing decompression sickness. Astronauts aboard the shuttle perform a similar procedure, lowering the spacecraft’s air pressure a day or so before a spacewalk.

The station’s size -- about that of a three-bedroom home -- makes it difficult to lower the air pressure throughout the complex. However, the airlock is about the same size as the shuttle’s cabin, making it perfect for the camp out.

Well, maybe not perfect. The crew will have to rough it with a cold supper, cold s’mores and no bathroom for the night.

Of course, Mission Control will be keeping a close watch to make sure the dress rehearsal goes well. If the test is a success, the crew will use the new plan later this year.
Lynette Madison
Johnson Space Center
› Back To Top