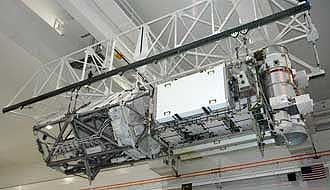 The next part of the International Space Station might resemble a cocoon when tucked inside Space Shuttle Atlantis for flight. But by the time it's deployed in space, the segment that will provide a quarter of the completed station's power capability will look more like an extremely large butterfly.

Image at Right: Suspended by an overhead crane in the Space Station Processing Facility, the two truss elements are clearly visible. Joined in the middle by struts are the hexagon-shaped P3 truss (left) with the solar alpha rotary joint attached, and the P4 truss (right) with its solar blankets and masts stowed. Photo credit: NASA/Troy Cryder

The port three and four (P3/P4) integrated truss segment is the prime payload of the STS-115 mission, scheduled to lift off from Launch Pad 39B at Kennedy Space Center, Fla., in late August or early September.

"The truss in its launch configuration is about 45 feet long, but once on orbit with the solar arrays deployed, it will have a wingspan of almost 240 feet," says Robbie Ashley, space station mission manager for the STS-115 mission. 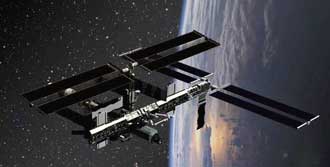 Image at Left: This illustration shows how the P3/P4 (with its solar arrays extended) will expand the International Space Station. The new truss segment and solar wings are visible on the right side of the station. Image credit: NASA

The mission's main objective is to resume space station construction by installing and activating the segment during three scheduled spacewalks. The trusses are part of the 11-segment structure that will eventually span more than 300 feet when the station is completed.

"The P3/P4 element will be installed on what is now the end of the P1 port truss segment already on orbit," explains Ashley. "It's going to provide two primary capabilities, the first being power. The power module will provide the capability to generate, store, distribute and regulate power for the space station. It's going to supplement the capability that is up there now with the P6 element. In addition, the P3 half of the truss has a mechanism that's going to rotate all of the outboard truss segments, including the solar arrays, to allow them to stay pointed at the sun for optimal power-generation capability." 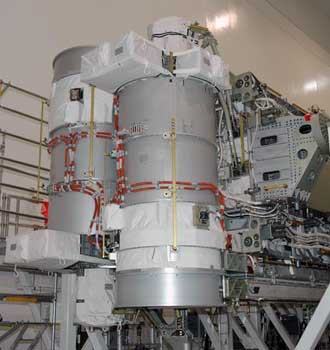 Image at Right: The canisters containing the masts for the solar arrays are visible on the end of the P4 truss. Once deployed, its two large solar arrays will provide one-fourth of the total power-generation capability of the completed station. Photo credit: NASA/Troy Cryder

A major spacewalk task will be deployment of the two solar wings. When extended, each solar wing will be 115 feet by 38 feet. They are deployed in opposite directions and each is made up of a center mast supporting a solar "blanket" on either side. Each wing uses nearly 33,000 solar cells and on Earth would weigh more than 2,400 pounds. The two new wings are capable of generating enough power to meet the needs of 30 average homes, based on consumption of 2 kilowatts of power each. 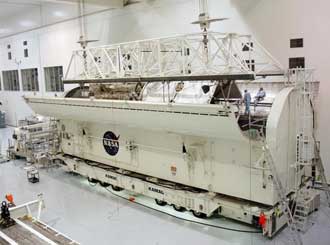 Image at Left: An overhead crane lowers the integrated truss segment into the waiting payload canister for transportation to Launch Pad 39B, where it will be loaded into Atlantis' cargo bay. Photo credit: NASA/Troy Cryder

The P3/P4 truss segment will be moved from the Space Station Processing Facility to Launch Pad 39B in a payload canister. It will then be transferred to the payload bay of Atlantis for launch on the STS-115 mission.
+ View Video (Real)
+ View Video (Windows)