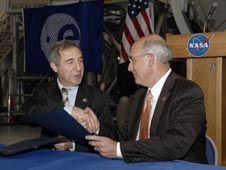 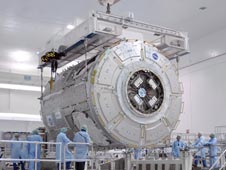 Image above: In the Space Station Processing Facility at NASA's Kennedy Space Center in Florida, an overhead crane lowers the Tranquility module, or Node 3, toward a work stand. Image credit: NASA/Jim Grossmann


The last major component set to be added to the International Space Station, the Node 3 module known as Tranquility, was officially transferred from the European Space Agency to NASA during a ceremony Nov. 20.

Inside the cavernous Space Station Processing Facility at NASA's Kennedy Space Center in Florida, officials from the two cooperating space agencies took the opportunity to reflect on the nearly completed station and its role in future space exploration.

"Station is truly a phenomenal engineering accomplishment, but as important as all that hardware is on orbit, what it really is, it’s the unity of all of us as partners," said Bob Cabana, Kennedy's director and a former astronaut who commanded the first space station construction mission. "All those different cultures coming together and working together as one for the betterment of not just our own countries, but our world, and preparing us to go beyond low Earth orbit to explore in space."

The pressurized node will provide additional room for crew members and many of the space station's life support and environmental control systems already on board. These systems include air revitalization, oxygen generation and water recycling. A waste and hygiene compartment and a treadmill also will be relocated from other areas of the station.

"ISS is the first necessary step in human's exploration beyond low Earth orbit," echoed Michael Suffredini, NASA's program manager for the International Space Station. "That's what the ISS was built to start, and that's what the ISS is now ready to do."

Tranquility was built for NASA by Thales Alenia Space in Turin, Italy, under contract to the European Space Agency. The module was part of ESA's barter agreement for which NASA delivered the Columbus laboratory to the station.

"The goal of tomorrow is to use this station, this beautiful achievement, to the maximum extent," said Bernardo Patti, head of the European Space Agency's space station program. "Now the ISS is becoming a full development program and it will be used as a platform to support an exploration program. We have all the ingredients to make that a success. We have the talent, we have the experience, and we have all the passion and the ideas."

Spanning about 22 feet in length and 14 feet in diameter, the node arrived at Kennedy aboard an Airbus "Beluga" aircraft in May 2009, and has been undergoing processing at Kennedy ever since.

Tranquility's connection point on the station will be on the Earth-facing side of the Unity node. The new component will provide an additional docking point for space shuttles and other crew vehicles visiting the station. Attached to Tranquility will be Cupola, a unique work module with six windows on the sides and one on top.

Both Tranquility and Cupola are set for delivery to the station early next year during space shuttle Endeavour's STS-130 mission.