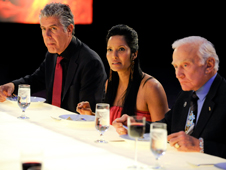 A new dish for astronauts in space has been created. Bravo TV's Emmy-award winning reality show "Top Chef" featured a special challenge to create a dish that could be freeze-dried and sent into space. "Chef'testant" Angelo Sosa's ginger lacquered short ribs with pea puree, pickled mushrooms and horseradish crème fraiche will be eaten by astronauts living and working in space.

Food preparation and taste have come a long way since the Apollo era. Today, the menu for astronauts includes 180 food and beverage items. These include tomato basil soup, chicken fajitas, shrimp cocktail, scrambled eggs and beef tips with mushrooms. They can also munch on nuts, granola bars and cookies. Beverages come in powdered form and include coffee, tea, apple cider, orange juice and lemonade.

As much as possible, NASA tries to provide astronauts with meals that look and taste like those on Earth. Crew members continually say that when they're in such an unfamiliar environment so far away, food is one of the main things that reminds them of home.

On Sept. 1, the chefs participated in a challenge to create a tasty meal for the astronauts. They were encouraged to follow the same nutritional guidelines that NASA food scientists follow in the Space Food Systems Laboratory in Houston.

This episode featured the space program with portions shot at the Goddard Space Flight Center in Greenbelt, Md. The “Top Chef” production crew, accompanied by head judge Tom Colicchio and the five contestants, visited Goddard and filmed in the Network Integration Center.

In addition to having his recipe prepared by NASA and flown aboard a future mission, Sosa also won a new Toyota Avalon and the opportunity to attend one of the two remaining shuttle launches from the Kennedy Space Center in Florida.