Grow Text SizeShrink Text Size
Experience of a Lifetime
On a brilliant October morning, students and teachers from six schools around the United States gathered at NASA's Kennedy Space Center in Florida to watch as space shuttle Discovery roared off its launch pad on mission STS-120.

Safely nestled inside the shuttle's payload bay was the Italian-built Node 2, which the students named Harmony, destined to become a permanent part of the International Space Station. 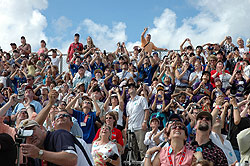 But let's step back in time and explain how the students ended up at Kennedy for the launch on Oct. 23, 2007.

Last year, NASA extended a "Name the ISS Node 2 Challenge" to schools throughout the country. More than 2,200 kindergarten through high school students from 32 states took part in the naming contest.

After researching how humans live and work in space, the students were tasked with building scale models, writing essays, creating electronic scrapbooks about the module and coming up with a meaningful name.

The contest submissions were sent to a panel of NASA scientists, engineers and educators and the winners were announced at a Kennedy event in March 2007.

The name Harmony was chosen by six different schools to win the competition. This was the first time a piece of the space station was named by anyone outside of NASA. 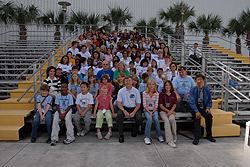 "We chose the name Harmony because our class had to work together in harmony and we thought that would be a good name," said Megan Littleton from Buchanan Elementary School in Baton Rouge, La.

NASA invited teachers and about 150 students with their parents to visit Kennedy for a grand tour of the center and to watch the shuttle launch.

Diana Winter from Browne Academy in Alexandria, Va., said she became interested in space after seeing the rings of Saturn through a telescope her grandpa had given her.

"I've been in awe of everything I've seen through the telescope that you can't really see (otherwise)."

Tanli Sun from Lubbock High School in Lubbock, Texas, is fascinated by the immensity of the universe. "Space is so limitless and infinite and mysterious. It grabs your attention because we don't know much about it and we would like to know more."

The students agreed that the name Harmony represented the coming together of people from different countries with a mutual purpose of exploring space and working on science and research projects together. 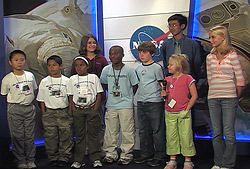 The module also will physically connect many international parts of the space station, serving as the uniting point between the U.S. Destiny lab, the European Columbus module and the Japanese Kibo module.

On the first of their five scheduled spacewalks, the STS-120 astronauts installed Harmony in a temporary position on the station on Oct. 26.

The 24-foot-long module becomes the first expansion of the station's living and working space since 2001.

The youngsters take pride in having participated in a history-making event. According to the students, they believe that everyday people should care about the space program.

Diana remarked that people never know how they'll be affected by the items NASA carries into space, like science experiments that could lead to a cure for cancer that couldn't be found on Earth because of certain conditions.

"Who knows what will happen when we go further to another planet and we figure out what's beyond what we know."