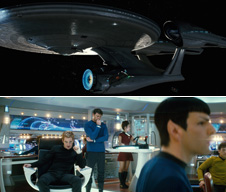 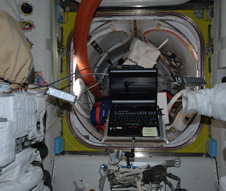 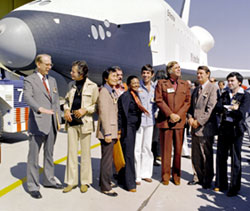 In 1976, NASA's space shuttle Enterprise rolled out of the Palmdale manufacturing facilities and was greeted by NASA officials and cast members from the 'Star Trek' television series.
› Full Image Feature

Many moviegoers likely will have to sit in crowded theaters to watch the new "Star Trek" movie, but not NASA astronaut Michael Barratt. He got the opportunity to watch the film aboard the International Space Station while he and two crewmates fly 220 miles above Earth. The only thing missing was the popcorn.

The film's production company, Paramount Pictures, transferred "Star Trek" to NASA's Mission Control in Houston, which then uplinked the film to the space station. Barratt watched the film Friday on a laptop computer inside the Unity module.

"I remember watching the original 'Star Trek' series and, like many of my NASA coworkers, was inspired by the idea of people from all nations coming together to explore space," said Barratt. " 'Star Trek' blended adventure, discovery, intelligence and story telling that assumes a positive future for humanity. The International Space Station is a real step in that direction, with many nations sharing in an adventure the world can be proud of."

There is a collection of DVDs and uplinked movies aboard the space station. The DVDs were delivered during previous shuttle and station missions and will remain aboard for the enjoyment of future crews. Some crews have had movie nights as regular activities. Former station astronaut Greg Chamitoff and his crewmates viewed the entire "Star Trek" series as a regular weekly event.

Films, books and music are important aspects of psychological support for astronauts on long-duration missions. Aside from watching movies and television shows, space station astronauts have a number of options for their leisure and personal time, such as reading books or magazines, listening to music, and playing musical instruments and board games.

Barratt launched to the space station aboard a Soyuz spacecraft in March. He is scheduled to return to Earth on a Soyuz spacecraft on Oct. 11. His station crewmates are Russian cosmonaut Gennady Padalka and Koichi Wakata of the Japan Aerospace Exploration Agency. All three will become part of the station's first six-person crew, Expedition 20, when three new crew members arrive on May 29.

Related
The Science of Star Trek
› Back To Top