Grow Text SizeShrink Text Size
NASA Payloads Take First Trip to Station Aboard Japanese Rocket
For the first time, two unpressurized orbital replacement units (ORUs) bound for the International Space Station will be delivered by a launch vehicle other than the space shuttle. Pressurized ORUs have been sent to the station before on other spacecraft. 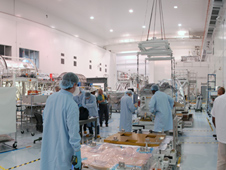 Image: The cargo transportation container is installed in a shipping container, which will be processed in Japan. Photo credit: NASA/Frankie Martin
› Larger image 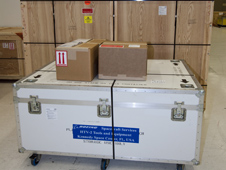 Image: Shipping containers packed with tools and flight support equipment for orbital replacement units are ready for the trip to Japan where they will be processed for launch to the International Space Station aboard HTV2. Photo credit: NASA/Jack Pfaller
› Larger image 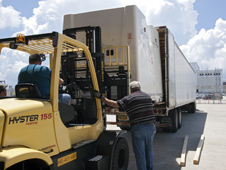 Image: Shipping containers packed with tools and flight support equipment for orbital replacement units are loaded onto a transport for the trip to Japan. Photo credit: NASA/Jack Pfaller
› Larger image


Another first for the unpressurized ORUs was traveling more than 7,500 miles by land, air and sea to arrive at their final processing and launch destination in Tanegashima, Japan, which is an island about 35 miles off the country's coast.

The ORUs are the flex hose rotary coupler (FHRC) and the cargo transportation container (CTC), which basically is a box containing five smaller ORUs. They will be installed in a Japanese H-II Transfer Vehicle (HTV-2) and launched to the International Space Station aboard a Japanese H-IIB rocket in January 2011.

"We've never done this before," said Dr. Jose Nunez, who is the NASA mission manager at Ken-nedy Space Center. "This is a whole new set of firsts that we've embarked on for NASA and Kennedy Space Center." The ORUs and associated equipment were processed at Kennedy's Space Station Processing Facility and crated for shipping. Then, the two massive containers, combined weighing nearly 9,000 pounds, and several smaller crates were transferred by forklift from the facility's shipping and receiving bay and loaded into a truck to start their journey.

"The upcoming HTV-2 launch is unique and exciting on multiple levels," said Josephine Burnett, director of Kennedy's International Space Station and Spacecraft Processing Directorate. "Our expertise in flight hardware ground processing is absolutely world class and I am extremely proud of the hard work and dedication of the Kennedy and Japan Aerospace Exploration Agency (JAXA) HTV-2 teams."

The ORUs overseas trip began with stops in Orlando, Fla., Atlanta and Chicago, before their flight to Narita and Kagoshima Port in Japan. They were then loaded on a ferry for transport to the space launch complex on the island.

Nunez explained that the ORUs are critical for the space station. The rotation capability for each station radiator assembly is provided through a thermal radiator rotary joint (TRRJ). The TRRJ then provides power, data and liquid ammonia transfer to the rotating radiator beam while providing structural support for the radiator panels. "The FHRC is the one that provides the transfer of liquid ammonia across the rotary joint. It will be stored up in space in case the one on station should fail," Nunez said.

"With each ORU having its own specific set of requirements and issues it was a lengthy event to get to this moment," Nunez said. "This is only the first phase, the second phase starts as soon as Kennedy's mission processing team arrives at the Tanegashima Space Center."

Nunez, along with Boeing Task Lead Mike Little, NASA Operations Engineer Curt Horanic, NASA Quality Engineer Steve Barry, and several Checkout Assembly and Payload Processing workers, will travel to Japan in early September to work with JAXA on final processing of the ORUs and installation into the transfer vehicle.

After launch to the orbiting laboratory, HTV-2 will fly close enough to the station for Expedition crew members to use the Canadarm2 to capture it and berth it to the Nadir port on the Harmony module. The ORUs will be removed and attached to the Japanese Exposed Facility and then to the Express Logistics Carrier-4 on the station.