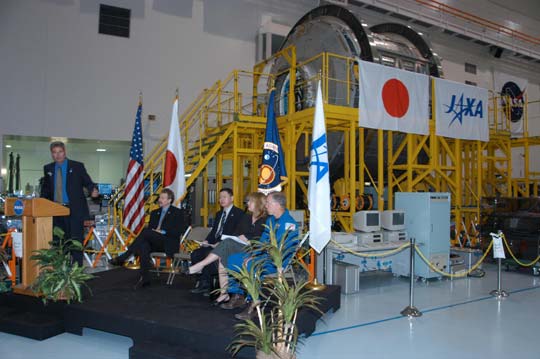 The second of two pressurized components for the Japanese Experiment Module Kibo has arrived at NASA's Kennedy Space Center in Florida. Kibo, which means hope, is Japan's first human space facility and its primary contribution to the International Space Station.

In the Space Station Processing Facility, representatives from both the Japanese Aerospace and Exploration Agency (JAXA) and NASA were on hand to mark the beginning of the final preparations for flight. Teams of Japanese and American technicians will work together to perform checkout and processing activities prior to launch. 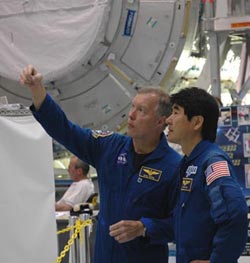 This pressurized section will be the first Kibo segment attached to the space station by the crew of the STS-123 shuttle mission, and will serve as a storage area for materials, tools and supplies. In addition, it will deliver eight experiment racks that will later be transferred to the main Kibo laboratory module.

Image at right: STS-123 Commander Dominic Gorie (left) and JAXA Astronaut Takao Doi discuss the Kibo pressurized segment that will be delivered to the space station during their mission. Image Credit: NASA