Grow Text SizeShrink Text Size
STS-120 Bringing Space Station ‘Harmony’
Think of the next component set for delivery to the International Space Station as an international crossroads in space. That's the major function of the Italian-built U.S. module that will be ferried to the station aboard space shuttle Discovery during mission STS-120. 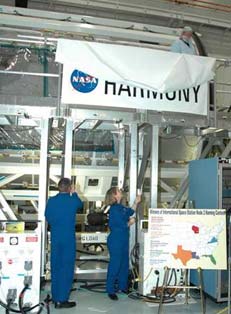 The pressurized component was named "Harmony" by U.S. students in a nationwide contest. "This module will allow all international partner pieces of the station to connect together, so it's really wonderful that kids recognize that harmony is necessary for space cooperation," said Bill Gerstenmaier, NASA's associate administrator for space operations, when the six winning schools who submitted the name were announced.

The module will be the connecting point between the U.S. Destiny lab, the European Space Agency's Columbus module and the Japanese Kibo module. Harmony's delivery to the station sets the stage for the following two space shuttle flights that will carry the Columbus and Kibo components to the station.

Those laboratory modules have been prepared side by side with Harmony in the high bay of the Space Station Processing Facility at NASA's Kennedy Space Center in Florida.

Harmony was delivered to Florida in 2003 aboard an Airbus Beluga aircraft.

"The first thing we did was a post-delivery inspection and checkout to make sure the ferry flight from Italy to Florida didn't cause any damage to the module," said Glenn Chin, the payload mission manager for STS-120. Since then, a team of technicians has worked to prepare it for flight.

Image at Right: In 2003, a Beluga aircraft brought the module from Italy, where it was built, to the Kennedy Space Center in Florida, where it is transferred to the Space Station Processing Facility. Image credit: NASA

Weighing 31,500 pounds when loaded for flight, the 24-foot-long component will be parked in a temporary spot on the space station by the STS-120 crew, since the docked shuttle will be occupying Harmony's permanent spot. Later, the space station crew will relocate the module to its permanent location. Harmony will be the fourth named U.S. module on the station, taking its place with the Destiny laboratory, the Quest airlock and the Unity node. 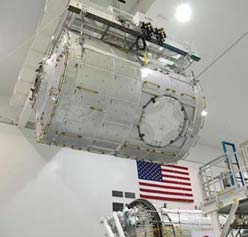 Image at Left: Inside the high bay of the Space Station Processing Facility, a crane carries Harmony toward a weight stand. Image credit: NASA/Jim Grossmann

"Harmony has been here with us for four years," explained Chin. "We've been working hard getting it ready for flight, and we've finally come to this stage of getting it ready to be put into the orbiter."

Before each mission, the astronauts who will deliver the space station element spend time inside the Space Station Processing Facility. "We had the crew here on about four different occasions" inspecting the module they will install on the orbiting outpost, said Chin.

While the excitement for the launch builds among those who have been working on the module since its arrival, there are also some mixed feelings about seeing it depart for its final destination. 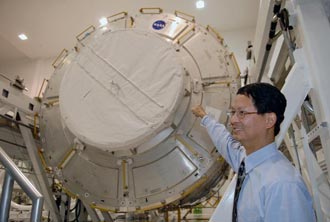 "It's an exhilarating feeling of excitement and we're all anxious to see Harmony get to the pad," said Chin. "I've never been a mission manager for any other mission that was as challenging." But even with all the excitement of the upcoming mission, he added that after working with the module for four years, "we'll definitely miss Harmony."