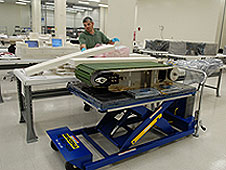 Pete Gauthier, a packing engineer for United Space Alliance, prepares the COLBERT treadmill and its parts for loading into the Multi-Purpose Logistics Module Leonardo in preparation for launch to the International Space Station. Image credit: NASA/Jack Pfaller
›  View Hi-res Image 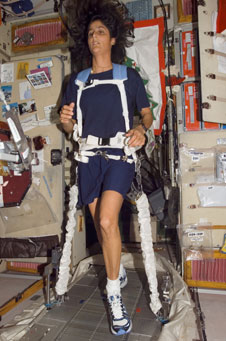 Astronaut Sunni Williams runs on the first treadmill installed on the International Space Station. Engineers applied lessons from the first treadmill when they designed the COLBERT. There are many differences between the two, including that the COLBERT has a larger surface for astronauts to run on. Image credit: NASA
›  View Hi-res Image 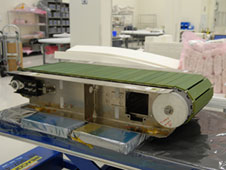 The COLBERT treadmill is adapted from a regular treadmill available on Earth. Engineers designed a structure to support the device that will let astronauts run on it without shaking the rest of the International Space Station or disturbing delicate experiments taking place in the weightless environment.
›  View Hi-res Image

NASA is serious about its space station crew members exercising in orbit, but that doesn’t mean the agency can’t have a little fun along the way.

That’s why a treadmill engineers had called simply T-2 for more than two years is suddenly famous as the Combined Operational Load-Bearing External Resistance Treadmill, or COLBERT. NASA selected the treadmill's name after comedian and host Stephen Colbert of Comedy Central's "The Colbert Report" took interest during the Node 3 naming census and urged his followers to post the name "Colbert," which received the most entries.

“I think it’s great for NASA that Mr. Colbert got his audience interested in the space station,” said Curt Wiederhoeft of Wyle. He is the project manager for the treadmill under the bioastronautics contract. “Comedy Central attracts a lot of younger viewers, and the space program’s going to need the next generation's support and interest.”

Wiederhoeft’s team heard about the name a month ago.

“When they first mentioned it, it was a distraction that we couldn’t afford because we were on a tight timetable,” he said. “Now that we’re down here and it’s delivered, it’s great. It’s a fun thing to think about.”

Engineers started with a medical treadmill available to anyone on Earth. They asked the manufacturer to nickel plate the parts and make some other modifications, but it is fundamentally the same running-in-place device as the others.

The structures around it are a different story.

First, without gravity to hold the runner to the surface of the treadmill, designers call on elastic straps that fit around the shoulders and waist to keep the runner from rocketing across the space station with the first hard step.

The straps create a feeling of running while wearing a backpack, Wiederhoeft said.

Next, designers had to work out a way to keep the treadmill from shaking the whole station with every step. That’s easy to do on Earth, but the station is floating just like the astronauts and wants to react against any movement. Even small actions can shake up delicate microgravity experiments taking place inside the station’s laboratories.

Developing a system to stop the vibrations was the biggest challenge, Wiederhoeft said.

While the first station treadmill relied on a powered system of gyroscopes and mechanisms to reduce vibrations, the COLBERT's Vibration Isolation System was designed to work without power and be more reliable than its predecessor.

The treadmill will rest on springs that are hooked to dampeners. That unit is connected to a standard-sized rack that has been extensively reinforced to handle the power produced by COLBERT users. The rack alone weighs 2,200 pounds, which is its limit.

COLBERT also is louder than the first treadmill, a trade-off Wiederhoeft said is necessary to increase its reliability.

"Noise and reliability are fighting against each other here," Wiederhoeft said. “With a lot more time we could have had both quiet and reliable. We went for reliable, and did what we could with noise.”

Now that the treadmill and its support system are designed, built and delivered to NASA’s Kennedy Space Center in Florida, another team of engineers is getting it ready to survive the rigorous vibrations of another kind: launch.

COLBERT has been disassembled into scores of parts and separated into more than six bags that will be strapped to racks inside the Leonardo cargo module. Leonardo, one of NASA’s multi-purpose logistics modules, or MPLMs, will be carried to the station by space shuttle Discovery during the STS-128 mission later this year.

Famous or not, the packing team intends to make sure everything that is launched reaches the station in good working order.

“If it’s the COLBERT, or if it’s something else, it’s still not going to be useful in orbit if it’s broken,” said Pete Gauthier, packing engineer for United Space Alliance.

“The difference with something like this is that it’s big and it’s heavy, so we have to use our biggest bag,” he said. “It’s easier for the crew if you have all the pieces in one bag, but when you have six bags, you just can’t do that.”

The astronauts on the station are expected to spend about 20 hours putting the whole thing together, including the vibration system. After that, the only care COLBERT should need is an occasional greasing of its bearings.

COLBERT will reside first inside the Harmony module, which connects the European and Japanese laboratories on the station. The treadmill rack will be on the floor of the node, although in weightlessness the orientation doesn’t matter as much as it does on Earth.

Later, COLBERT will move into Tranquility, the station’s third node, which is targeted to launch aboard STS-130. Current plans call for COLBERT to be placed against the wall inside Tranquility.

The treadmill is designed to last the life of the station. Although it is built to handle 150,000 miles of running, it will likely see about 38,000 miles during its time in orbit, Wiederhoeft said.