Grow Text SizeShrink Text Size
Do Tread on Me 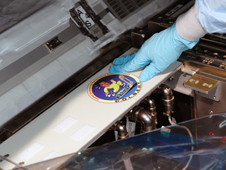 On Earth, we all know that exercise is good for us. But do we know exactly how good?

The situation is similar on the International Space Station. Astronauts and cosmonauts have been working out on orbit for close to 10 years, and researchers believe the exercise is a good countermeasure for the bone and muscle density loss that occurs when humans live for a long time without gravity.

But the exercise equipment on the station doesn’t have the ability to record details about the workouts. Two new workout tools do have that capability. One, the Advanced Resistive Exercise Device, is on orbit already. A second was transferred to the station on Sept. 1 during the STS-128 shuttle mission.

+View the transfer and installation of the COLBERT treadmill

The Combined Operational Load Bearing External Resistance Treadmill, or COLBERT, will be the second treadmill on the space station, adding to a complement of six different exercise devices already in orbit that range from stationary bicycles to resistive exercise devices.

Named after comedian Stephen Colbert of Comedy Central's "The Colbert Report," the new treadmill, first and foremost, is a critical countermeasure device that will be used to keep the international crew healthy while in orbit and prepare them for return to Earth.

According to Project Manager Kevin MacNeil of NASA’s Johnson Space Center, Houston, the COLBERT will have data collection devices that will allow doctors and scientists to see how well the treadmill exercise is minimizing the amount of bone and muscle density loss due to life without gravity. They’ll use data on treadmill speed, session duration and body loading.

The first experiment to use the COLBERT will be the Functional Task Test (FTT), a study designed to identify the key underlying physiological factors that contribute to performance of of critical mission tasks for lunar and Mars operations.

The actual treadmill for COLBERT was purchased from Woodway USA, Waukesha, Wis. The COLBERT and supporting subsystems (power, cooling, etc.) will be housed in an International Standard Payloads Rack (ISPR). The entire assembly will be housed initially in the station’s Harmony module, then be moved to the Tranquility node after it is launched in early 2010.

The total weight of the COLBERT rack is 2,200 pounds, including a modified Passive Rack Isolation System (PaRIS) that uses two-stage isolators, or shock absorbers to keep the exercise from interfering with microgravity sensitive experiments.

“The main purpose to the treadmill, of course, is to work out those walking and running muscles that would otherwise go unused up here,” wrote Astronaut Ed Lu in one of his Expedition 7 journals in 2003. “To get a good aerobic workout, I walk for a mile, then run a couple of sets of half a mile each, then walk for a while longer. The pounding from the running may be helpful for preventing bone loss in the hips and legs, although the astronauts who flew on the Mir Space Station ran on the treadmill there and still suffered significant bone loss.”

COLBERT is designed so that ground experts tracking crew health in orbit can create individual exercise prescriptions and uplink them to the crew as a profile. COLBERT will use the same control interface as that used for the ARED so that crew members won’t have to learn a new one. The interface looks nearly identical to what you’d find in many gyms on Earth. Runners also will be able to set up a laptop computer and watch their favorite video on the go.

Each crew member is required to work out a total of two and a half hours a day, about an hour of that on the treadmill. Astronauts are expected to burn between 250 and 500 calories while working out on COLBERT, and researchers will measure that by tracking the foot force of running. Ground experts finally will be able to figure out how well runners are being conditioned or losing their deconditioning, and adjust exercise prescriptions accordingly.

Setting up for an exercise session on COLBERT “should be fairly simple,” MacNeil said. “The first runner of the day will turn it on by flipping the rack power switch. After waiting a couple minutes for all systems to activate, they’ll position the control interface to a location comfortable for them. They’ll connect bungee cords to provide a load that will generate the foot force necessary to give the astronaut’s bones and muscles a workout in the absence of gravity. They’ll put on the harness that connects them to the bungees, set the desired load and verify that they agree with their prescription. Then, they’ll log into the system, pick a profile, hit start and go …”

NASA selected the treadmill's name after Colbert took interest in NASA’s online Node 3 naming poll and urged his viewers to submit the name "Colbert.” Although NASA ended up choosing the suggested name “Tranquility” for the node, the agency designated its new treadmill “COLBERT” in honor of the name that received the most entries. Expedition 14 and 15 astronaut Suni Williams made the announcement on "The Colbert Report" two years after running the Boston Marathon in space.

The COLBERT rack, treadmill and support hardware will launch in the Leonardo Multipurpose Logistics Module and be transferred to the station on flight day 5. The new workout machine will be set up and used after the shuttle Discovery departs.