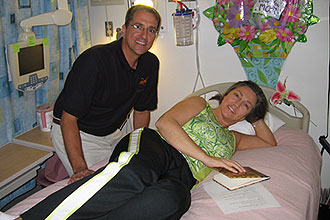 On a quiet wing of the University of Texas Medical Branch at Galveston, healthy people spend weeks at a time just lying around.

Image at Right: Astronaut Don Thomas visited members of the bed rest study in June, posing for souvenir photos -- like this one, with volunteer Beth Ann Shriber -- and expressing gratitude for their work: "Twenty years from now, when we land on Mars, I hope you're watching it," he told them. "I really appreciate the effort you're putting in. This is important stuff." Photo courtesy of UTMB.

And without taking a small step – or even lifting a foot – they’re making future giant leaps for mankind possible.

Beth Ann Shriber was there 90 days. That’s three months of not just lying down, but lying down with her head about 5 inches lower than her feet at all times. When she ate, when she slept, when she showered, when she went to the bathroom – her body stayed at a 6 degree tilt through it all. She could roll over or prop herself up on an elbow, but sitting or standing was off limits. It wasn’t exactly hard, Shriber said, but she wouldn’t call being a test subject in NASA’s Bed Rest Project easy, either.

“You don’t have to do anything but lie here,” she said. “I would say it’s more about enduring.”

Voluntarily enduring those conditions might sound crazy, but there’s a method to Shriber’s madness. Without an antigravity chamber, this is the best way to simulate on Earth what going without gravity does to humans in outer space.

Bill Paloski, principal scientist in the Human Adaptation and Countermeasures Office, said that during extended bed rest, muscles begin to atrophy and bone density decreases. It’s a use-‘em-or-lose-‘em sort of situation. At the same time, your overall fitness level decreases because your heart isn’t working as hard to pump your blood. The same thing happens when astronauts spend weeks and months floating around in space – they don’t need to use more than a fingertip to propel themselves across the room, so their muscles go on vacation.

Shriber’s seemed to leave the country.

“I can tell,” she said during the test. “Every other day when I shower – when I come back, I’m huffing and puffing.”

But just lying down doesn’t give you the full zero-gravity experience, said Liz Warren, deputy project scientist for the Artificial Gravity Study. Without gravity pulling them down, astronauts can float to the top of the shuttle or space station. And without gravity pulling the fluids in their bodies down, more of it tends to stay at the top of their bodies. So, to recreate the experience on terra firma, the subjects lie with their feet slightly above their heads, letting the Earth’s gravity pull the fluids toward their heads instead of their feet.

“You can feel the shift,” said Nathan Thomas, another test subject. “It feels like I’ve got a sinus problem.”

Still, he believes a stuffy nose is a small price to pay.

“This is for the world and connecting with other worlds,” he said. “This is trying to keep the astronauts going.”

And he’s right. Part of the project includes trying to reverse the effects of the extended bed rest – and by extension zero gravity. Unlike Shriber, Thomas was part of the Artificial Gravity Study, which meant he only stayed in bed 21 days. But during that time he spent an hour a day lying on a machine, spinning. The machine is a centrifuge, and its spin creates an artificial gravity. At a speed of 30 rotations per minute, Thomas’ feet feel the force of about 2.5 times Earth’s gravity, which draws the fluids back down.

“When I get on there, it relieves the sinuses,” Thomas said. “I can feel my feet getting big. It feels like you’ve got weights on.”

Relieving the sinus pressure might be nice, but Warren said the more important benefit of forcing the fluid down is to give the heart a workout. The centrifuge forces the cardiovascular system to work against the artificial gravity being created. And the weight of that extra gravity helps keep bones and muscles strong.

“We’re hoping this benefits the whole physiology of the person, not just one system,” Warren said.

Paloski said it’s too early to know whether that hope is being realized – at this point only three test subjects have finished the study. Still, results from those three were promising. If the rest of the study goes as well, the knowledge could then be used in future space flights – as exploration ventures farther into the galaxy and keeps astronauts away from Earth for longer periods of time, the absence of gravity wouldn’t be such a problem.

So in a few years, when astronauts land on Mars, Shriber, Thomas and the other test subjects will be able to say they helped them get there. Shriber is looking forward to that.

“There’re not a lot of times in life when you can do something bigger than yourself,” she said. “The astronauts can’t do what they do unless people like me do what we do.”

For information on how to take part in the Bed Rest Study, visit www.bedreststudy.com. Test subjects are reimbursed for travel, lost time and inconvenience.