Stardust's Final Hours
The last few hours of the Stardust mission will be filled with significant milestones. On Jan. 14 at 11:23 pm EST mission controllers will command the spacecraft to begin the computer-controlled sequence that will release the sample return capsule. On Jan. 15 at 12:56 am EST the Stardust spacecraft will complete the sequence by severing the umbilical cables between spacecraft and capsule. One minute later, springs aboard the spacecraft will literally push the capsule away. Fifteen minutes after release – while the sample return capsule continues its trajectory towards the Utah Test and Training Range, the Stardust spacecraft will perform a maneuver to place it in orbit around the Sun. 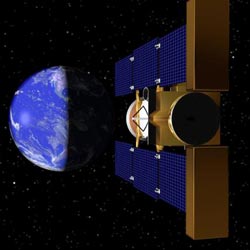 At 4:57 am EST, four hours after being released by the Stardust spacecraft, the capsule will enter Earth's atmosphere at an altitude of 125 kilometers (410,000 feet) over Northern Calif. At this point it will be 20 kilometers (12.43 miles) east of the coast and 22 kilometers (13.67 miles) south of the Oregon-California border. The velocity of the sample return capsule as it enters Earth's atmosphere at 46,440 kilometers per hour (28,860 miles per hour) will be the greatest of any human-made object on record. This will surpass the record set in May 1969 during the return of the Apollo 10 command module.

If weather conditions allow, the recovery team will be flown by helicopter to recover the capsule and fly it to the U.S. Army Dugway Proving Ground, Utah, for initial processing. If weather does not allow helicopters to fly, special off-road vehicles will be used to transport the recovery team to retrieve the capsule and return it to Dugway. The collector grid with cometary and interstellar samples will be moved to a special laboratory at NASA's Johnson Space Center, Houston, where they will be preserved and studied by scientists.