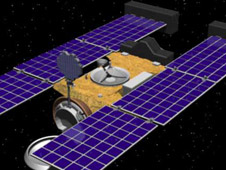 Launched on Feb. 7, 1999, Stardust , covered 3-billion-miles during its first seven years in space before returning the world's first samples from a known comet. Stardust's tennis racket-like, aerogel-lined collector was extended to capture particles hurtling at it at about six times the speed of a rifle bullet, as the spacecraft flew within 240 kilometers (149 miles) of comet Wild 2 in January 2004. The return capsule landed Jan. 15, 2006, in Utah, carrying both interstellar and comet particles, completing the first U.S. space mission to return extraterrestrial material from beyond the orbit of Mars. Two days later the capsule was transported to a curatorial facility at NASA's Johnson Space Center in Houston.

With its prime mission complete, NASA re-designated the Stardust mission as Stardust-NExT. Short for Stardust-New Exploration of Tempel, Stardust-NExT is a low-cost, Discovery Program mission of opportunity that will expand the investigation of comet Tempel 1 initiated by NASA's Deep Impact spacecraft. The extended mission tasks the Stardust spacecraft to fly by the comet Tempel 1 on Feb. 14, 2011. During the flyby, it will obtain high-resolution images of the comet?s coma and nucleus, as well as measurements of the composition, size distribution, and flux of dust emitted into the coma. Mission planners hope Stardust-NExT will provide important new information on how Jupiter-family comets evolve and how they formed 4.6 billion years ago.

While the Stardust spacecraft is unavailable for public viewing at present (it is more than 13.5 million kilometers, or 8.4 million miles, from Earth), the public can view its sample return capsule. In Jan. 2006, the capsule became the fastest manmade object ever to enter Earth's atmosphere at over 46,400 kilometers per hour (28,800 mph). The capsule is on display at the National Air and Space Museum's Milestones of Flight Gallery in Washington.