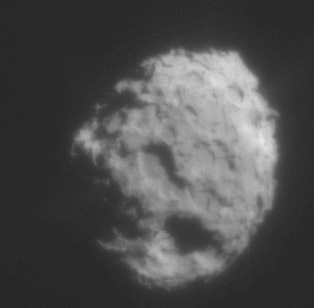 Comet Wild 2 is shown in this image taken by the Stardust navigation camera during the spacecraft's closest approach to the comet on January 2. The image was taken within a distance of 500 kilometers (about 311 miles) of the comet's nucleus with a 10-millisecond exposure. A total of 72 images were taken of the comet during the flyby. More images, which may be of higher resolution and greater detail, will be transmitted to Earth on Saturday. Photo Credits: NASA/JPL.

Team Stardust, NASA's first dedicated sample return mission to a comet, passed a huge milestone today by successfully navigating through the particle and gas-laden coma around comet Wild 2 (pronounced "Vilt-2"). During the hazardous traverse, the spacecraft flew within 240 kilometers (149 miles) of the comet, catching samples of comet particles and scoring detailed pictures of Wild 2's pockmarked surface. "Things couldn't have worked better in a fairy tale," said Tom Duxbury, Stardust project manager at NASA's Jet Propulsion Laboratory, Pasadena, Calif. "These images are better than we had hoped for in our wildest dreams," said Ray Newburn of JPL, a co-investigator for Stardust. "They will help us better understand the mechanisms that drive conditions on comets." "These are the best pictures ever taken of a comet," said Principal Investigator Dr. Don Brownlee of the University of Washington, Seattle. "Although Stardust was designed to be a comet sample return mission, the fantastic details shown in these images greatly exceed our expectations." The collected particles, stowed in a sample return capsule onboard Stardust, will be returned to Earth for in-depth analysis. That dramatic event will occur on January 15, 2006, when the capsule makes a soft landing at the U.S. Air Force Utah Test and Training Range. The microscopic particle samples of comet and interstellar dust collected by Stardust will be taken to the planetary material curatorial facility at NASA's Johnson Space Center, Houston, Texas, for analysis. Stardust has traveled about 3.22 billion kilometers (2 billion miles) since its launch on February 7, 1999. As it closed the final gap with its cometary quarry, it endured a bombardment of particles surrounding the nucleus of comet Wild 2. To protect Stardust against the blast of expected cometary particles and rocks, the spacecraft rotated so it was flying in the shadow of its "Whipple Shields." The shields are named for American astronomer Dr. Fred L. Whipple, who, in the 1950s, came up with the idea of shielding spacecraft from high-speed collisions with the bits and pieces ejected from comets. The system includes two bumpers at the front of the spacecraft -- which protect Stardust's solar panels -- and another shield protecting the main spacecraft body. Each shield is built around composite panels designed to disperse particles as they impact, augmented by blankets of a ceramic cloth called Nextel that further dissipate and spread particle debris. "Everything occurred pretty much to the minute," said Duxbury. "And with our cometary encounter complete, we invite everybody to tune in about one million, 71 thousand minutes from now when Stardust returns to Earth, bringing with it the first comet samples in the history of space exploration." Scientists believe in-depth terrestrial analysis of the samples will reveal much about comets and the earliest history of the solar system. Chemical and physical information locked within the cometary particles could be the record of the formation of the planets and the materials from which they were made. More information on the Stardust mission is available at http://stardust.jpl.nasa.gov . Stardust, a part of NASA's Discovery Program of low-cost, highly focused science missions, was built by Lockheed Martin Space Systems, Denver, Colo., and is managed by JPL for NASA's Office of Space Science, Washington, D.C. JPL is a division of the California Institute of Technology in Pasadena.