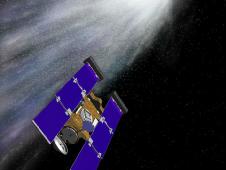 Comets are big balls of ice and dust. As they get near the sun, they warm up and the ice sublimes, going from a solid ice to gas. As the gas is ejected from the comet, it blows off like a wind, releasing dust particles and producing a comet's tail. In the case of comet Wild 2, there were at least 20 jets operating. The whole comet measured nearly three miles (3 km) in diameter.
Credit: NASA 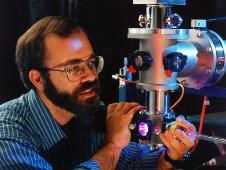 The specimens are so tiny that scientists are finding them difficult to study. Dr. Sandford is shown using a high angle annular dark field (HAADF) electron microscope to study the comet particles.
Credit: NASA 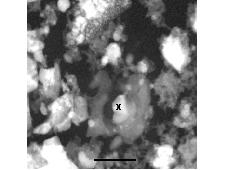 Every particle is its own little zoo, with its own unique mixture of component members. Shown above is an image, taken using an electron microscope, of a portion of a comet particle from Comet Wild 2. The light gray doughnut surrounding the X consists of carbon-rich organic material. The scale bar at the bottom of the figure is 0.1 microns long.
Credit: Matrajt et al. 2008

NASA scientists have discovered a new class of organics in the comet dust captured from Comet Wild 2 in 2004 by NASA’s Stardust mission spacecraft.

More "primitive" than any material found in meteorites, scientists believe these organics may represent some of the original material used to build everything in our Solar System, including life on Earth.

"Comets formed in the outer Solar System, so they have not undergone the changes that have happened to planetary materials. They probably contain some of the best samples of pristine early Solar System materials," said Scott Sandford, an astrophysicist at NASA Ames Research Center, Moffett Field, Calif. and a co-investigator on the NASA Stardust mission.

Scientists believe that Comet Wild 2 formed in the outer Solar System and was injected into the Kuiper Belt outside the orbit of Neptune more than 4.5 billion years ago. In 1974, it wandered into the inner Solar System, where a close encounter with Jupiter changed its trajectory into its current orbit, where it now travels much closer to the sun.

Somehow, this new organic, so far found only in comets, was captured and preserved in the comet. Unlike the majority of meteoritic organics, scientists have discovered that this new type of extraterrestrial organic material does not contain polycyclic aromatic hydrocarbons (PAHs), which is unusual, considering that PAHs are the most common organic molecules found in space.

The structure of this new population of organics is chemically "simple," showing a smaller variety of bonding states than typically seen in meteoritic organics. It also is enriched with oxygen and nitrogen, according to Sandford.

"It looks like the organic material we produce when we expose water-rich ices to ultraviolet radiation under space-like conditions in the laboratory," explained Sandford. "It suggests the possibility that comets contain some of the original organic products churned out by dense interstellar nebulae when their particle contents were bombarded by cosmic rays and ultraviolet radiation.”

According to scientists, materials from Comet Wild 2 have not changed much since they were first captured by the comet. This may imply that these materials had little or no exposure to processing while they resided in the comet.

"Basically, it looks like the comet has kept these samples in cold storage for the last 4.5 billion years," said Sandford.

The Stardust samples may hold the key to many unanswered questions regarding the origin of the Solar System, but the specimens are so tiny that scientists are finding them difficult to study. The particles are not simple, single grains. Instead, most particles consist of aggregates of many smaller grains. These smaller grains show a wild variety of compositions, including many different types of minerals and various types of organics.

"This is one of the hardest things about studying the samples brought back by Stardust - every particle is its own little zoo, with its own unique mixture of component members. The samples are incredibly small and very complex," said Sandford.

Nevertheless, Sandford said that studies of the samples indicate that the early solar nebula underwent considerable mixing as our planetary system formed. Analyses of the comet dust particles showed aggregate mixtures of both mineral grains and relatively volatile organics, which are organics that evaporate easily.

Scientists observed that some of the minerals are very well crystallized, which can only happen at high temperatures. At low temperatures, these minerals would form some kind of "glass." Therefore, scientists believe the minerals had to form near the sun.

Conversely, scientists theorize that the new organics could not have formed in such a hot environment because of their volatility. Instead, these organics probably formed in the cold, dense interstellar medium, or in the very outer reaches of the protosolar nebula from which the Solar System formed, according to Sandford.

Finding both high-temperature minerals and low-temperature volatile organics in the same comet indicates that materials moved great distances, both inwards and outwards, in the disk of gas and dusk that formed the Solar System, said Sandford.

"It was like a washing machine where everything got mixed up. Some of the material, like the high-temperature minerals, had to mix near the sun, get cooked, and then continue mixing as they moved outward where the comet was formed," said Sandford. "Other materials, like the volatile organics, didn’t do this, or they would have been destroyed."

In addition to the new organics, some of the organic materials from the comet look similar to those seen in primitive meteorites.

The fact that disparate things are seen together reveals that materials mixed in the protosolar nebula and little else happened after the comet was formed. At least, not until NASA scientists captured it.

"We know this because the minerals and organics sit side by side each other, while maintaining very different natures," said Sandford.

For more information about NASA, Stardust studies and other mission information, visit: