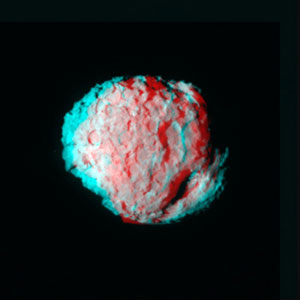 Comets may be more than just simple conglomerations of ice, dust and gases.

Some may be important windows on the early solar system. Others may have contributed materials necessary to the development of life on our own planet.

Scientists have found a wide range of compositions and structures for the comet Wild 2 particles that were captured and returned to Earth by the Stardust mission. Their findings indicate the formation of at least some comets may have included materials ejected from the inner solar system to the far and cold outer edge of the solar nebula.

Minerals formed near the sun or other stars were in the samples returned to Earth by NASA's Stardust spacecraft in January. The findings suggest materials from the inner regions of the solar system could have traveled to the outer reaches where comets formed. This may alter the way scientists view the formation and composition of comets.

"We have found very high-temperature minerals, which supports a particular model where strong bipolar gas jets coming out of the early sun propelled material formed near to the sun outward to the outer reaches of the solar system," said Michael Zolensky, NASA cosmic mineralogist and Stardust co-investigator at the Johnson Space Center, Houston. "It seems that comets are not composed entirely of volatile rich materials but rather are a mixture of materials formed at all temperature ranges, at places very near the early sun and at places very remote from it."

Zolensky is lead author of a paper on the mineralogy of the captured comet particles, one of seven reports about the mission's initial findings in the Dec. 15, 2006, issue of Science Express, the on-line edition of the journal Science.

Scientists have long thought of comets as cold, billowing clouds of ice, dust and gases formed on the edges of the solar system. But comets may not be so simple or similar. They may prove to be diverse bodies with complex histories. Comet Wild 2 certainly is made up of components of more complex history than thought.

Such a diversity of high- and low-temperature minerals requires a wide range of formation conditions, probably reflecting different formation locations. Many particles did not form in the cold environment and location(s) where cometary ices condensed.

They needed high temperatures to form as well as complex and as yet little understood dynamical processes to end up where comets actually formed. Also, particles from different environments must have undergone some process of accretion to end up as aggregates composed of different minerals.

One of the major discoveries from the analysis of the comet samples was finding particles rich in organic matter. "Comets are believed to have brought water and organic matter to the early Earth, and it is important to understand the nature of these materials because they are necessary ingredients for the origin of life," said Lindsay Keller, NASA scientist at JSC and Stardust co-investigator. "One of the first analyses we obtained on the samples showed abundant hydrocarbons in many of the particles."

Subsequent analyses revealed that some of the organic matter formed in the cold cloud of dust and gas that was the precursor to the solar system.

Keller led a team of U.S. and international scientists using spectroscopic techniques to study the Stardust samples. Spectroscopy uses different wavelengths of light and other radiation to discover the chemical makeup of materials. The team's results also appear in this week's issue of Science.

In addition to finding these varied compositions in the Wild 2 samples, Stardust investigators found a wide diversity of particle densities. The captured Wild 2 samples are predominantly fine-grained, loosely bound aggregates, most also containing much larger individual crystals of olivine, pyroxene and iron/nickel sulfides. All analyses suggest that small and large Wild 2 particles are composed of a similar, if not identical, suite of minerals.

"Many researchers, but not all, have thought that cometary solids are similar to interstellar dust, which is generally fine grained," said Friedrich Horz, NASA planetary scientist at JSC and lead author of a paper on impact features on Stardust and comet Wild 2 dust. "These models entail that such particles existed during the formation of comets, as 'leftovers' from the initial gas and solid mixture that were not processed further during comet formation in the cold environment from the sun."

Scientists found a much wider diversity of particle densities, including dense minerals, than advocated earlier by some researchers.

"We see and demonstrate for the first time that there is a continuum between fine particles and more dense objects, the latter including pure minerals of, for example, olivine and iron sulfide," said Horz. "The range in density and cohesion that we saw and infer thus disagrees specifically with the popular model that comets are composed of only fine grains. A minority, however, did allow for particles of variable density. We have confirmed the latter viewpoint."

For more information about Stardust studies and other mission information, visit: