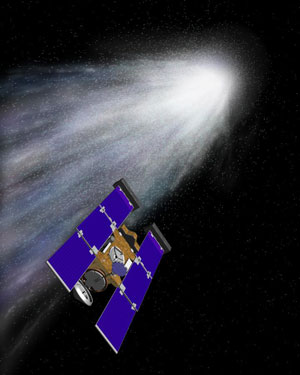 Materials formed in different times and places in space mixed "a whole lot" during the solar system's formation, according to an international team of scientists who studied comet particles captured by NASA's Stardust spacecraft in January 2004.

About 170 scientists studied bits of material caught by the Stardust spacecraft during its encounter with comet Wild 2. The scientists' findings appear in seven reports about the mission in the Dec. 15, 2006, issue of the journal Science. Stardust delivered the first pristine, solid samples from outside the Earth-moon system when a capsule containing the comet materials parachuted into Utah in January 2006.

"Comet dust seems to be a real zoo of things; we see all kinds of particles that are clearly formed at different places, possibly at different times and certainly under different conditions," said Scott Sandford, lead author of the 'organics' paper and a scientist from NASA Ames Research Center in California's Silicon Valley. His paper also revealed that scientists found a new class of organics in the comet dust.

A panel of three Stardust scientists will present additional findings during a news conference Thursday, Dec. 14, at 5 p.m. EST (2 p.m. PST) at the American Geophysical Union fall meeting in San Francisco in the Moscone Center South, Room 232 (747 Howard Street, between 3rd and 4th Streets). The panelists include Stardust principal investigator Donald Brownlee, a professor at the University of Washington, Seattle, and lead author of an overview technical paper; Sandford; and Mike Zolensky of NASA Johnson Space Center, Houston, who is lead author of a study about the mineralogy of the captured comet particles.

"All seven papers, to some degree, indicate that when the solar system was forming, there was a whole lot of mixing going on," Sandford said.

Brownlee estimates that as much as 10 percent of the material in comets came from the inner solar system. "That's a real surprise because the common expectation was that comets would be made of interstellar dust and ice," Brownlee observed.

The Stardust spacecraft was launched on Feb. 7, 1999, from Cape Canaveral Air Station, Fla., aboard a Delta II rocket. The NASA probe flew through comet dust and captured specks of it in a very light, low-density substance called aerogel. The capsule – small enough to hug – landed in the Utah Test and Training Range, southwest of Salt Lake City, on Jan. 15, 2006. During the capsule's high-speed reentry into Earth's atmosphere, NASA studied the capsule's heat shield material, which yielded information that could be useful for heat shield development for future missions to the moon and beyond.

After the preliminary examinations were complete, all the samples were transferred to NASA's curatorial office at NASA Johnson, where they will be made available to the general scientific community for more detailed study.

"I anticipate that people will be asking for and working on these samples for decades to come," Sandford said.

For more information about Stardust studies and other mission information, visit: