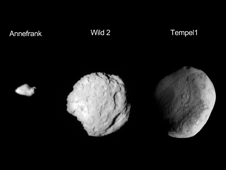 PASADENA, Calif. -- NASA's Stardust spacecraft sent its last transmission to Earth at 4:33 p.m. PDT (7:33 p.m. EDT) Thursday, March 24, shortly after depleting fuel and ceasing operations. During a 12-year period, the venerable spacecraft collected and returned comet material to Earth and was reused after the end of its prime mission in 2006 to observe and study another comet during February 2011.

The Stardust team performed the burn to depletion because the comet hunter was literally running on fumes. The depletion maneuver command was sent from the Stardust-NExT mission control area at Lockheed Martin Space Systems in Denver. The operation was designed to fire Stardust's rockets until no fuel remained in the tank or fuel lines. The spacecraft sent acknowledgment of its last command from approximately 312 million kilometers (194 million miles) away in space.

"This is the end of the spacecraft's operations, but really just the beginnings of what this spacecraft's accomplishments will give to planetary science," said Lindley Johnson, Stardust-NExT and Discovery program executive at NASA Headquarters in Washington. "The treasure-trove of science data and engineering information collected and returned by Stardust is invaluable for planning future deep space planetary missions."

After completion of the burn, mission personnel began comparing the computed amount of fuel consumed during the engine firing with the anticipated amount based on consumption models. The models are required to track fuel levels, because there are no fully reliable fuel gauges for spacecraft in the weightless environment of space. Mission planners use approximate fuel usage by reviewing the history of the vehicle's flight, how many times and how long its rocket motors fired.

"Stardust's motors burned for 146 seconds," said Allan Cheuvront, Lockheed Martin Space Systems Company program manager for Stardust-NExT in Denver. "We'll crunch the numbers and see how close the reality matches up with our projections. That will be a great data set to have in our back pocket when we plan for future missions."

Launched Feb. 7, 1999, Stardust flew past the asteroid named Annefrank and traveled halfway to Jupiter to collect the particle samples from the comet Wild 2. The spacecraft returned to Earth's vicinity to drop off a sample return capsule eagerly awaited by comet scientists.

NASA re-tasked the spacecraft as Stardust-NExT to perform a bonus mission and fly past comet Tempel 1, which was struck by the Deep Impact mission in 2005. The mission collected images and other scientific data to compare with images of that comet collected by the Deep Impact mission in 2005. Stardust traveled approximately 21 million kilometers (13 million miles) around the sun in the weeks after the successful Tempel 1 flyby. The Stardust-NExT mission met all mission goals, and the spacecraft was extremely successful during both missions. From launch until final rocket engine burn, Stardust travelled approximately 5.69 billion kilometers (3.54 billion miles).

After the mileage logged in space, the Stardust team knew the end was near for the spacecraft. With its fuel tank empty and final radio transmission concluded, history's most traveled comet hunter will move from NASA's active mission roster to retired.

"This kind of feels like the end of one of those old western movies where you watch the hero ride his horse towards the distant setting sun -- and then the credits begin to roll," said Stardust-NExT project manager Tim Larson from NASA's Jet Propulsion Laboratory in Pasadena, Calif. "Only there's no setting sun in space."

Stardust and Stardust-NExT missions were managed by JPL for NASA's Science Mission Directorate in Washington. The missions were part of the Discovery Program managed at NASA's Marshall Space Flight Center in Huntsville, Ala. Joe Veverka of Cornell University was the Stardust-NExT principal investigator. Don Brownlee of the University of Washington in Seattle was the Stardust principal investigator. Lockheed Martin Space Systems built the spacecraft and managed day-to-day mission operations.