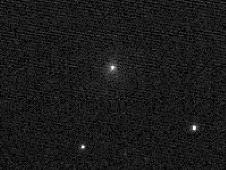 This composite image was taken by NASA's Stardust spacecraft 42 hours before its encounter with comet Tempel 1. Image credit: NASA/JPL-Caltech/Cornell
› Full image and caption

✓ NASA's Stardust-NExT mission has turned on its automatic navigation system in preparation to fly by comet Tempel 1 at about 8:40 p.m. PST (11:40 EST) tonight.

✓As of about 10 p.m. PST (1 a.m. EST on Feb. 15), NASA's Stardust spacecraft has turned to point its high-gain antenna at Earth and started downlinking data through that antenna. It is expected to beam back the first images of Tempel 1 at around midnight PST (3 a.m. EST), Feb. 15. Check back for the first images.

The flyby of Tempel 1 will give scientists an opportunity to look for changes on the comet's surface since it was visited by NASA's Deep Impact spacecraft in July 2005. Since then, Tempel 1 has completed one orbit of the sun, and scientists are looking forward to discovering any differences in the comet.

During the encounter phase, the spacecraft will carry out many important milestones in short order and automatically, as the spacecraft is too far away to receive timely updates from Earth. These milestones include turning the spacecraft to point its protective shields between it and the anticipated direction from which cometary particles would approach. Another milestone will occur at about four minutes to closest approach, when the spacecraft will begin science imaging of the comet's nucleus.

The nominal imaging sequence will run for about eight minutes. The spacecraft's onboard memory is limited to 72 high-resolution images, so the imaging will be most closely spaced around the time of closest approach for best-resolution coverage of Tempel 1's nucleus. At the time of closest encounter, the spacecraft is expected to be approximately 200 kilometers (124 miles) from the comet's nucleus.

Live coverage on NASA TV and via the Internet begins at 8:30 p.m. PST (11:30 p.m. EST) from mission control at NASA's Jet Propulsion Laboratory in Pasadena, Calif. Coverage also will include segments from the Lockheed Martin Space System's mission support area in Denver. A post-flyby news conference is planned on Feb. 15 at 10 a.m. PST (1 p.m. EST).

The live coverage and news conference will also be carried on one of JPL's Ustream channels. During events, viewers can take part in a real-time chat and submit questions to the Stardust-NExT team at: http://www.ustream.tv/user/NASAJPL2 .

During its 12 years in space, Stardust became the first spacecraft to collect samples of a comet (Wild 2 in 2004), which were delivered to Earth in 2006 for study. The Stardust-NExT mission is managed by JPL for NASA's Science Mission Directorate in Washington. Lockheed Martin Space Systems in Denver built the spacecraft and manages day-to-day mission operations.

A press kit and other detailed information about Stardust-NExT is online at: http://stardustnext.jpl.nasa.gov .