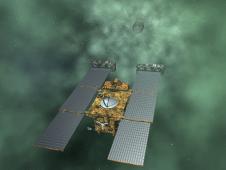 A bonus round is something one usually associates with the likes of a TV game show, not a pioneering deep space mission. "We are definitely in the bonus round," said Stardust-NExT Project Manager Tim Larson of NASA's Jet Propulsion Laboratory in Pasadena, Calif. "This spacecraft has already flown by an asteroid and a comet, returned comet dust samples to Earth, and now has almost doubled its originally planned mission life. Now it is poised to perform one more comet flyby."

NASA's Stardust spacecraft was launched on Feb. 7, 1999, on a mission that would explore a comet as no previous mission had. Before Stardust, seven spacecraft from NASA, Russia, Japan and the European Space Agency had visited comets – they had flight profiles that allowed them to perform brief encounters, collecting data and sometimes images of the nuclei during the flyby.

Like those comet hunters before it, Stardust was tasked to pass closely by a comet, collecting data and snapping images. It also had the ability to come home again, carrying with it an out-of -this-world gift for cometary scientists – particles of the comet itself. Along the way, the telephone booth-sized comet hunter racked up numerous milestones and more than a few "space firsts."

In the first round of its prime mission, Stardust performed observations of asteroid Annefrank, only the sixth asteroid in history to be imaged close up. After that, Stardust racked up more points of space exploration firsts. It became the first spacecraft to capture particles of interstellar dust for Earth return. It was first to fly past a comet and collect data and particles of comet dust (hurtling past it at almost four miles per second) for later analysis. Then, it was first to make the trip back to Earth after traveling beyond the orbit of Mars (a two-year trip of 1.2 billion kilometers, or 752 million miles). When Stardust dropped off its sample return capsule from comet Wild 2, the capsule became the fastest human-made object to enter Earth's atmosphere. The mission was also the first to provide a capsule containing cometary dust specimens, speciments that will have scientists uncovering secrets of comets for years to come.

With such a high tally of "firsts" on its scoreboard, you'd think Stardust could receive a few parting gifts and leave the game. And an important part of the original spacecraft is currently enjoying retirement – albeit a high-profile one: Stardust's 100-pound sample return capsule is on display in the main hall (Milestones of Flight) of the Smithsonian's National Air and Space Museum in Washington. But the rest of NASA's most-seasoned comet hunter is still up there – and there is work still to be done.

"We placed Stardust in a parking orbit that would carry it back by Earth in a couple of years, and then asked the science community for proposals on what could be done with a spacecraft that had a lot of zeros on its odometer, but also had some fuel and good miles left in it," said Jim Green, director of NASA's Planetary Science Division.

Moving into the Bonus Round

In January 2007, from a stack of proposals with intriguing ideas, NASA chose Stardust-NExT (Stardust's Next Exploration of Tempel). It was a plan to revisit comet Tempel 1 at a tenth of the cost of a new, from-the-ground-up mission. Comet Tempel 1 was of particular interest to NASA. It had been the target of a previous NASA spacecraft visit in July 2005. That mission, Deep Impact, placed a copper-infused, 800-pound impactor on a collision course with the comet and observed the results from the cosmic fender-bender via the telescopic cameras onboard the larger part of Deep Impact, a "flyby" spacecraft observing from a safe distance.

"The plan for our encounter is to be more hospitable to comet Tempel 1 than our predecessor," said Joe Veverka, principal investigator of Stardust-NExT from Cornell University in Ithaca, N.Y. "We will come within about 200 kilometers [124 miles] of Tempel 1 and view the changes that took place over the past five-and-a-half years."

That period of time is significant for Tempel 1 -- it is the period of time it takes the comet to orbit the sun once. Not much happens during a comet's transit through the chilly reaches of the outer solar system. But when it nears perihelion (the point in its orbit that an object, such as a planet or a comet, is closest to the sun), things begin to sizzle.

"Comets can be very spectacular when they come close to the sun, but we still don't understand them as well as we should," said Veverka. "They are also messengers from the past. They tell us how the solar system was formed long ago, and Stardust-NExT will help us understand how much they have changed since their formation."

So the spacecraft that had traveled farther afield than any of its predecessors was being sent out again in the name of scientific opportunity. In between spacecraft and comet lay four-and-a-half years, over a billion kilometers (646 million miles), and more than a few hurdles along the way.

Your Mileage May Vary

"One of the challenges with reusing a spacecraft designed for a different prime mission is you don't get to start out with a full tank of gas," said Larson. "Just about every deep-space exploration spacecraft has a fuel supply customized to get the job done, with some held in reserve for contingency maneuvers and other uncertainties. Fortunately, the Stardust mission navigation team did a great job, the spacecraft operated extremely well, and there was an adequate amount of contingency fuel aboard after its prime mission to make this new comet flyby possible – but just barely."

Just how much fuel is in Stardust's tanks for its final act?

"We estimate we have a little under three percent of the fuel the mission launched with," said Larson. "It is an estimate, because no one has invented an entirely reliable fuel gauge for spacecraft. There are some excellent techniques with which we have made these estimates, but they are still estimates."

One of the ways mission planners can approximate fuel usage is to look at the history of the vehicle's flight and how many times and for how long its rocket motors have fired. When that was done for Stardust, the team found their spacecraft's attitude and translational thrusters had fired almost half-a-million times each over the past 12 years.

"There is always a little plus and minus with each burn. When you add them all up, that is how you get the range of possible answers on how much fuel was used," said Larson.

Fuel is not the only question that needs to be addressed on the way to a second comet encounter. Added into the mix is the fact a comet near the sun can fire off jets of gas and dust that can cause a change in its orbit, sometimes in unexpected ways, potentially causing a precisely designed cometary approach to become less precise. Then there are the distances involved. Stardust will fly past comet Tempel 1 on almost the opposite side of the sun from Earth, making deep-space communication truly, well, deep space. Add into the mix the Stardust spacecraft itself. Launched when Bill Clinton was in the White House, Stardust has been cooked and frozen countless times during its trips from the inner to outer solar system. It has also weathered its fair share of radiation-packed solar storms. But while its fuel tank may be running near-empty, that doesn't mean Stardust doesn't have anything left in the tank.

"All this mission's challenges are just that – challenges," said Larson. "We believe our team and our spacecraft are up to meeting every one of them, and we're looking forward to seeing what Tempel 1 looks like these days."

Larson, Veverka and the world will get their chance beginning a few hours after the encounter on Monday, Feb. 14, at about 8:56 p.m. PST (11:56 p.m. EST), when the first of 72 bonus-round images of the nucleus of comet Tempel 1 are downlinked.

All images of the comet will be taken by the spacecraft's navigation camera – an amalgam of spare flight-ready hardware left over from previous NASA missions: Voyager (launched in 1977), Galileo (launched in 1989), and Cassini (launched in 1997). Each image will take about 15 minutes to transmit. The first five images to be received and processed on the ground are expected to include a close up of Tempel 1's nucleus. All data from the flyby (including the images and science data obtained by the spacecraft's two onboard dust experiments) are expected to take about 10 hours to reach the ground.