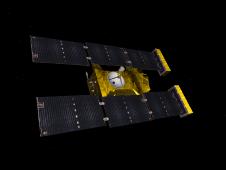 PASADENA, Calif. – Just over two weeks before its flyby of comet Tempel 1, NASA's Stardust spacecraft fired its thrusters to help refine its flight path toward the comet. The Stardust-NExT mission will fly past comet Tempel 1 on Valentine's Day (Feb. 14, 2011).

The trajectory correction maneuver, which adjusts the spacecraft's flight path, began at about 4 p.m. EST (1:00 p.m. PST) on Monday, Jan. 31. The Stardust spacecraft's rockets fired for 130 seconds, consumed about 300 grams (10.6 ounces) of fuel and changed the spacecraft's speed by 2.6 meters per second (about 5.8 mph).

"An almost six-miles-per-hour change may seem insignificant when we're closing in on the comet at 24,236 miles per hour [39,000 kilometers per hour]," said Tim Larson, Stardust-NExT project manager at NASA's Jet Propulsion Laboratory in Pasadena, Calif. "But we're still two weeks and 8.37 million miles [13.5 million kilometers] away from the comet. At that distance, our burn will move our location at time of closest approach to the comet by almost 1,900 miles [3,058 kilometers]. By observing the results of these planned maneuvers and making further rocket burns, that's how we get a spacecraft to be where we want it, when it's on the other side of the solar system."

NASA's plan for the Stardust-NExT mission is to fly the spacecraft to target a point in space about 200 kilometers (124 miles) from comet Tempel 1 at the time of its closest approach – about 8:56 p.m. PST on Feb. 14 (11:56 p.m. EST). This is a bonus mission for the comet chaser, which previously flew past comet Wild 2 and returned particles from its coma to Earth. During this bonus encounter, the spacecraft will take images of the comet's surface to observe what changes have occurred since a NASA spacecraft last visited. (NASA's Deep Impact executed an encounter with Tempel 1 in July 2005).

Along with the high-resolution images of the comet's surface, Stardust-NExT will also measure the composition, size distribution and flux of dust emitted into the coma, and provide important new information on how Jupiter-family comets evolve and how they formed 4.6 billion years ago. A Jupiter-family comet is a comet whose orbit has been modified by close passages to Jupiter. They have orbital periods less than 20 years.

Launched on Feb. 7, 1999, Stardust became the first spacecraft in history to collect samples from a comet (Wild 2), and return them to Earth for study. While its sample return capsule parachuted to Earth in January 2006, mission controllers were placing the still-viable spacecraft on a path that would allow NASA the opportunity to re-use the already-proven flight system if a target of opportunity presented itself. In January 2007, NASA re-christened the mission "Stardust-NExT" (New Exploration of Tempel), and the Stardust team began a four-and-a-half year journey for the spacecraft to comet Tempel 1. This will be the second exploration of Tempel 1 by a spacecraft (Deep Impact).