Stardust Samples Show Evidence of Fire, Ice
Stardust samples of comet particles might seem like a strange place to find a big component of the green sand found on some Hawaiian beaches, but there it was.

The spacecraft, which flew within 150 miles of the comet Wild 2 in January 2004, brought back samples that may provide new insights into the composition of comets and how they vary from one another, scientists said Monday. 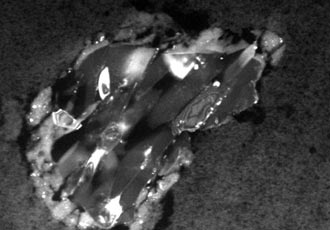 Image at right: This two-micrometer comet particle, collected by the Stardust spacecraft, is made up of the silicate mineral forsterite, which can found on Earth in gemstones called peridot. Photo Credit: NASA/JPL

"Remarkably enough, we have found fire and ice," said Donald Brownlee, Stardust principal investigator and professor of astronomy at the University of Washington in Seattle. The returned samples show high-temperature materials from the coldest part of our solar system.

Brownlee and fellow scientists spoke at NASA's Johnson Space Center to reporters at JSC and at other NASA Centers.

Comets, they said, may not be as simple as the clouds of ice, dust and gases they were thought to comprise. They may be diverse with complex and varied histories. Wild 2 seems to be an example of that complexity.

The material like that in the green Hawaiian beach sand is called olivine. Its presence in the comet's dust trail was a surprise. "It seems that comets are … a mixture of materials formed at all temperatures, at places very near the early sun and at places very remote from it," said Michael Zolensky, Stardust curator and co-investigator at JSC.

Olivine's components include iron, magnesium and other elements. The Wild 2 samples have other high-temperature materials containing calcium, aluminum and titanium.

Stardust's seven-year journey ended with a landing in the Utah desert Jan. 15. Wild 2 samples arrived at JSC Jan. 17. Samples have been distributed to about 150 scientists around the world for study.

Most of the grains embedded in the Stardust low-density-glass aerogel are smaller than the width of a hair, but there appear to be thousands of them. The trails of perhaps two dozen larger particles are visible to the unaided eye.

+ View briefing graphics
›Back To Top