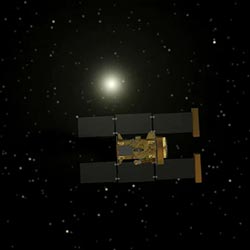 "We sang our spacecraft to sleep today with a melody of digital ones and zeros," said Tom Duxbury, Stardust project manager at NASA's Jet Propulsion Laboratory, Pasadena, Calif. "Stardust has performed flawlessly these last seven years and 2.88 billion miles and deserves a rest for a while, like the rest of the team."

The "song" was actually a series of commands that was sent up to the spacecraft yesterday, Jan. 29 at 4 p.m. Pacific time (7 p.m. Eastern time). The commands deactivated all but a few essential systems, such as Stardust's solar arrays and receive antenna - which will remain powered on. This long-term hibernation state could allow for almost indefinite (tens of years) out-of-contact operations while maintaining the spacecraft health.

"Placing Stardust in hibernation gives us options to possibly reuse it in the future," said Dr. Tom Morgan, Stardust Program Executive at NASA Headquarters, Washington. "The mission has already been a great success, but if at all possible we may want to add even more scientific dividends to this remarkable mission's record of achievement."

The Stardust spacecraft is currently in an orbit that travels from a little closer to the Sun than that of the Earth to well beyond the orbit of Mars. It will next fly past Earth on January 14, 2009, at a distance of about 1 million kilometers (621,300 miles).

Stardust scientists at NASA's Johnson Space Center in Houston are currently analyzing what could be considered a treasure-trove of cometary and interstellar dust samples that exceeded their grandest expectations. Scientists believe these precious samples will help provide answers to fundamental questions about comets and the origins of the solar system.