Stardust Mission Status Report
Ten days before its historic return to Earth with the first-ever samples from a comet, NASA's Stardust spacecraft successfully performed its 18th flight path adjustment. This second-to-last scheduled maneuver puts the spacecraft on the right path to rendezvous with Earth on Jan. 15 (Universal Time), when it will release its sample return capsule. 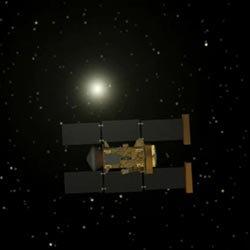 At 1800 Universal Time (10:00 am Pacific Time) on Thursday, Jan. 5, Stardust fired all eight of its 4.4 newton (1-pound) thrusters for a total of 107 seconds, changing the comet sampler's speed by 2.4 meters per second (about 5.4 miles per hour). The maneuver required 385 grams (0.85 pounds) of hydrazine monopropellant to complete. A final trajectory correction maneuver is scheduled prior to release of the sample return capsule.

"It was a textbook maneuver,"?said Ed Hirst, Stardust deputy mission manager at NASA's Jet Propulsion Laboratory, Pasadena, Calif. "After sifting through all the post-burn data, I expect we will find ourselves right on the money."

In the early morning hours of January 15, 2006, the Stardust mission returns to Earth after a 4.63 billion kilometer (2.88 billion mile) round-trip journey carrying a precious cargo of cometary and interstellar dust particles. Scientists believe Stardust's cargo will help provide answers to fundamental questions about the origins of the solar system.

Scientists believe in-depth terrestrial analysis of cometary samples will reveal much not just about comets but about the earliest history of the solar system. Locked within the cometary particles is unique chemical and physical information that could be the record of the formation of the planets and the materials from which they were made.

For information about NASA and agency programs on the Web, visit: http://www.nasa.gov/home .