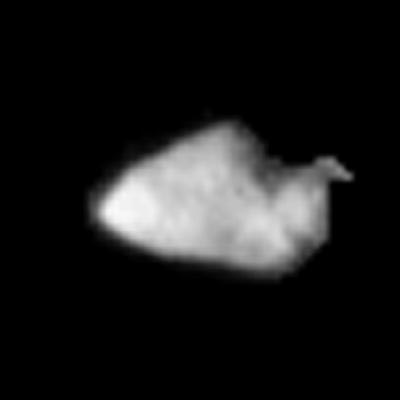 Asteroid Annefrank is seen as irregularly shaped, cratered body in an image taken by NASA's Stardust spacecraft during a Nov. 2, 2002, flyby of the asteroid.

Stardust flew within about 3,300 kilometers (2,050 miles) of the asteroid as a rehearsal for the spacecraft's encounter with its primary target, comet Wild 2, in January 2004. The camera's resolution was sufficient to show that Annefrank is about 8 kilometers (5 miles) in length, twice the predicted size from Earth-based observations. The surface reflects about 0.1 to 0.2 percent of sunlight, slightly less than anticipated. A few craters that are hundreds of meters across can be seen. The straight edge in the right side of the image may be an artifact of processing.

Stardust will bring samples of comet dust back to Earth in 2006 to help answer fundamental questions about the origins of the solar system. Lockheed Martin Astronautics, Denver, Colo., built and operates the Stardust spacecraft. Stardust is a part of NASA's Discovery Program of low-cost, highly focused science missions. JPL, a division of the California Institute of Technology in Pasadena, manages the mission for NASA's Office of Space Science,Washington, D.C.