Grow Text SizeShrink Text Size
Overview
Stardust-NExT (Stardust-New Exploration of Tempel) is an extended mission that utilizes the already "in flight" Stardust spacecraft to fly by comet temple 1 in Feb. 2011 and extend the investigation of that comet by the Deep impact mission. Note - while the mission name has been changed to Stardust-NExT the spacecraft will continue to be referred to as "Stardust." 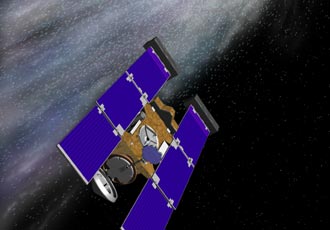 In the early 1990s, NASA established a program called Discovery to competitively select proposals for low-cost solar system exploration missions with highly focused science goals. Stardust, the fourth Discovery mission, sent a spacecraft to fly through the cloud of dust that surrounds the nucleus of a comet. For the first time ever, the mission brought cometary material back to Earth.

Stardust was the first U.S. mission dedicated solely to a comet and was the first to return extraterrestrial material from outside the orbit of the moon. Stardust's main objective was to capture a sample from a well-preserved comet called Wild-2 (pronounced "Vilt-2").

On January 2, 2004, Stardust flew close to comet Wild-2 and collected cometary particles for analysis. On January 15, 2006, samples of comet and interstellar dust were delivered in a return capsule that will landed in the Utah desert. Through the course of the entire mission, Stardust flew a total of 5.2 billion kilometers (3.2 billion miles).

Managed by JPL, the mission is led by Principal Investigator Dr. Donald C. Brownlee of the University of Washington. The spacecraft was designed and built by Lockheed Martin Astronautics, Denver.

Following the sample return, the spacecraft was reconfigured for a new mission called Stardust-Next .

More information about Stardust is available online at http://stardust.jpl.nasa.gov/index.html.
› Back To Top