Catching Comet Dust With Aerogel
The primary objective of the Stardust mission is to capture both cometary samples and interstellar dust. Main challenges to accomplishing this successfully involve slowing down the particles from their high velocity with minimal heating or other effects that would cause their physical alteration. When the Stardust Spacecraft encounters the Comet Wild 2, the impact velocity of the particles will be up to 6 times the speed of a rifle bullet. Although the captured particles will each be smaller than a grain of sand, high-speed capture could alter their shape and chemical composition - or even vaporize them entirely. 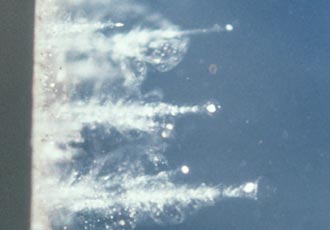 To collect particles without damaging them, Stardust uses an extraordinary substance called aerogel. This is a silicon-based solid with a porous, sponge-like structure in which 99.8 percent of the volume is empty space. By comparison, aerogel is 1,000 times less dense than glass, which is another silicon-based solid. When a particle hits the aerogel, it buries itself in the material, creating a carrot-shaped track up to 200 times its own length. This slows it down and brings the sample to a relatively gradual stop. Since aerogel is mostly transparent - with a distinctive smoky blue cast - scientists will use these tracks to find the tiny particles.

Aerogel is not like conventional foams, but is a special porous material with extreme microporosity on a micron scale. It is composed of individual features only a few nanometers in size. These are linked in a highly porous dendritic-like structure. This exotic substance has many unusual properties, such as low thermal conductivity, refractive index and sound speed - in addition to its exceptional ability to capture fast moving dust. Aerogel is made by high temperature and pressure-critical-point drying of a gel composed of colloidal silica structural units filled with solvents. Aerogel was prepared and flight qualified at the Jet Propulsion Laboratory (JPL). JPL also produced aerogel for the Mars Pathfinder and Stardust missions, which possesses well-controlled properties and purity. This particular JPL-made silica aerogel approaches the density of air. It is strong and easily survives launch and space environments. JPL aerogel capture experiments have flown previously and been recovered on Shuttle flights, Spacelab II and Eureca. 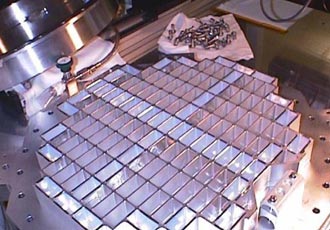 The aerogel aboard the Stardust Spacecraft is fitted into a "tennis racket" shaped collector. This is unfolded from the protective Sample Return Capsule to expose it to space during flight. One side of the collector will be faced towards the particles in Comet Wild 2, while the reverse, or B side, will be turned to face the streams of interstellar dust encountered during its journey.

When hypervelocity particles are captured in aerogel they produce narrow cone-shaped tracks that are hollow, and can easily be seen in the highly transparent aerogel by using a stereomicroscope. This cone is largest at the point of entry, and the particle is held intact at the point of the cone. This provides a method for determining which direction the dust came from, and is the basis of the approach of using single slabs of aerogel to collect both cometary and interstellar dust from both sides.

After the encounter with Comet Wild 2, the aerogel collector will be retracted into the Sample Return Capsule (SRC) and returned to Earth for detailed analysis by scientists at the NASAs Johnson Space Center.