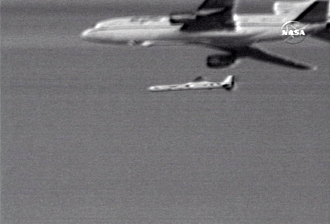 Image above: The Pegasus rocket carrying ST5 drops away from the L-1011 carrier aircraft known as "Stargazer." Image credit: NASA

ST5 Micro Satellites Successfully Launched
NASA's ST5 mission launched from an Orbital Sciences Pegasus rocket from Vandenberg Air Force Base in California following a flawless countdown. Built by Orbital Sciences, the Pegasus is a unique vehicle that begins its flight secured to the underbelly of a modified L-1011 passenger jet known as the "Stargazer." The Pegasus is then released for its powered flight into space. The mission's three micro satellites were deployed as expected, one at a time and three minutes apart.